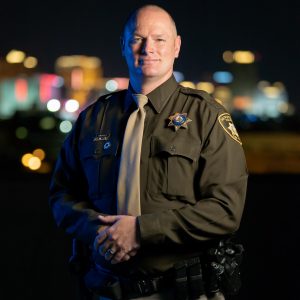 Police Officer Jason Swanger joined the LVMPD on February 12, 2014. He began his law enforcement career working patrol at Enterprise Area Command (EAC). From there, Officer Swanger went to work in South Central Area Command (SCAC) before returning to EAC. Officer Swanger became a Field Training Officer, where he was a lead officer in overseeing the training of new officers during their first year of patrol. He was devoted to the Explorer Program and active in helping to educate children at Steve Schorr Elementary School and Charles A. Silvestri Junior High School about law enforcement and good life choices

Before joining the LVMPD, Officer Swanger served as a culinary specialist in the United States Navy for 11 years. He continued to serve his country by joining the Nevada Army National Guard.

He was known as a devoted father and husband who went the extra mile for people in need and dedicated himself to policing to make a difference in other people’s lives.  Officer Swanger died on June 24, 2021, of complications from COVID-19. He was 41.