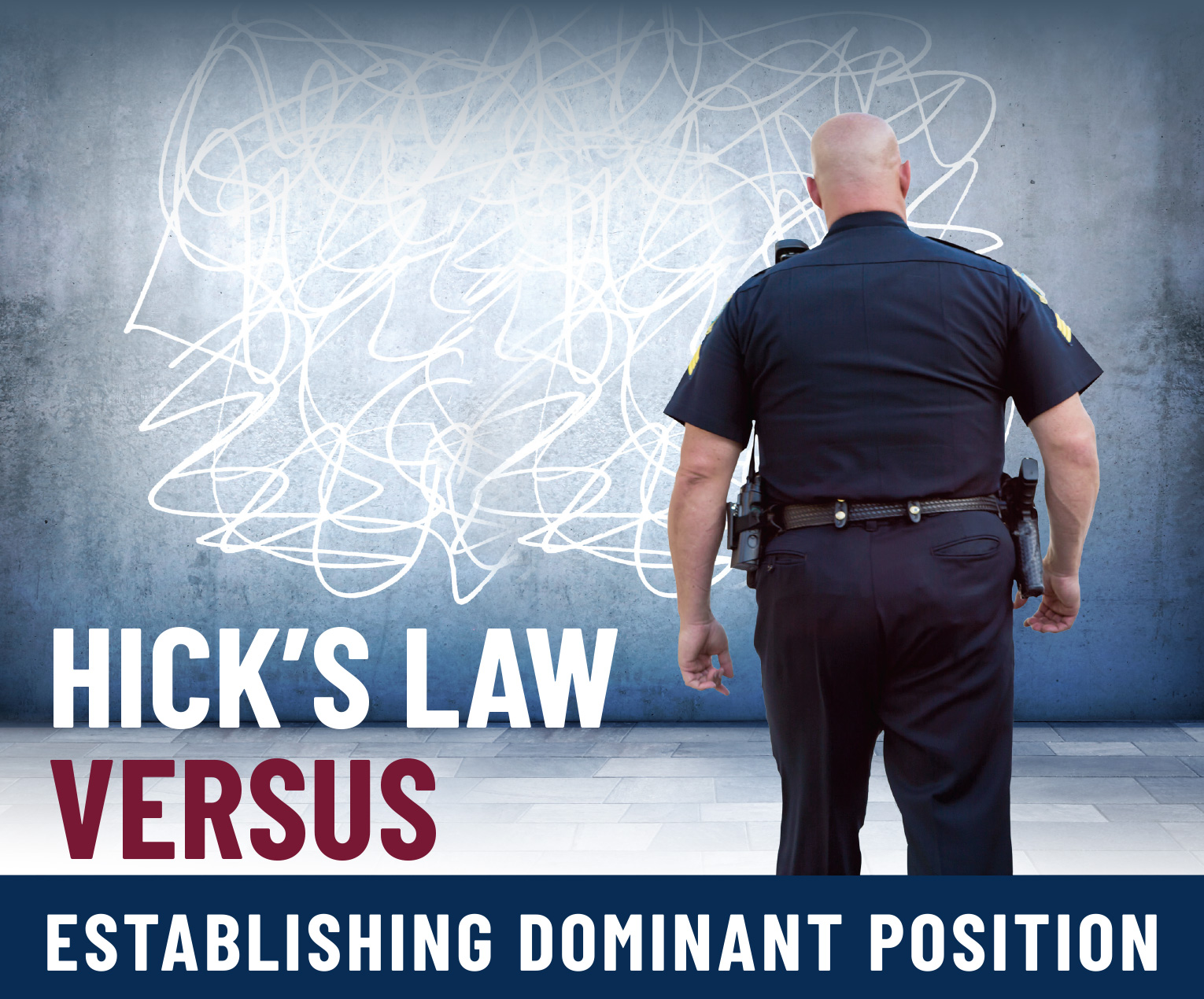 Hick’s Law is a phenomenon that is often quoted within the training industry. Hick’s Law was originally applied to early computer systems and stated that too many options for the computer to consider would cause the system to bog down and hesitate. Early DT instructors and martial arts instructors took this concept and applied it to combatives training. Hick’s Law is no longer relevant to computers, and I do not believe it applies to effective combatives training, either.

Hick’s Law states that if you train multiple techniques to respond to a threat, once you are put under pressure and attacked, you will be “frozen” and unable to select one of the techniques in the heat of the moment. While frozen with indecision, the officer will get overwhelmed by the suspect’s attack, often leading to the officer doing nothing but cowering in the face of the attack. In training that I have personally conducted, the officer may remain frozen, even while being hit or shot at with simunition rounds, until they are verbally prompted to fight back.

As a result of Hick’s Law, many trainers decide the answer is to only give students one or two options in response to a threat. These “options” are commonly taught as one or two key techniques. This approach can be limited in its effectiveness as well. Over the years, I have learned that any technique can fail or be countered, regardless of Hick’s Law. I teach this principle to students through the “counter principle.” The counter principle says that nothing works all the time, in every situation, with every opponent. Any technique chosen may fail or be countered. If this is true, how then do I choose what one or two techniques I will pick to teach as an answer to Hick’s Law?

Officers who train with uncooperative opponents understand that Hick’s Law is an illustration of why technique-based combative training systems fail, whether your system/curriculum has 200 techniques, 20, or even just one or two. No matter what you pick as the technique to train, you will encounter several problems. The technique you choose may not be something that all of your officers are comfortable performing or even capable of executing. 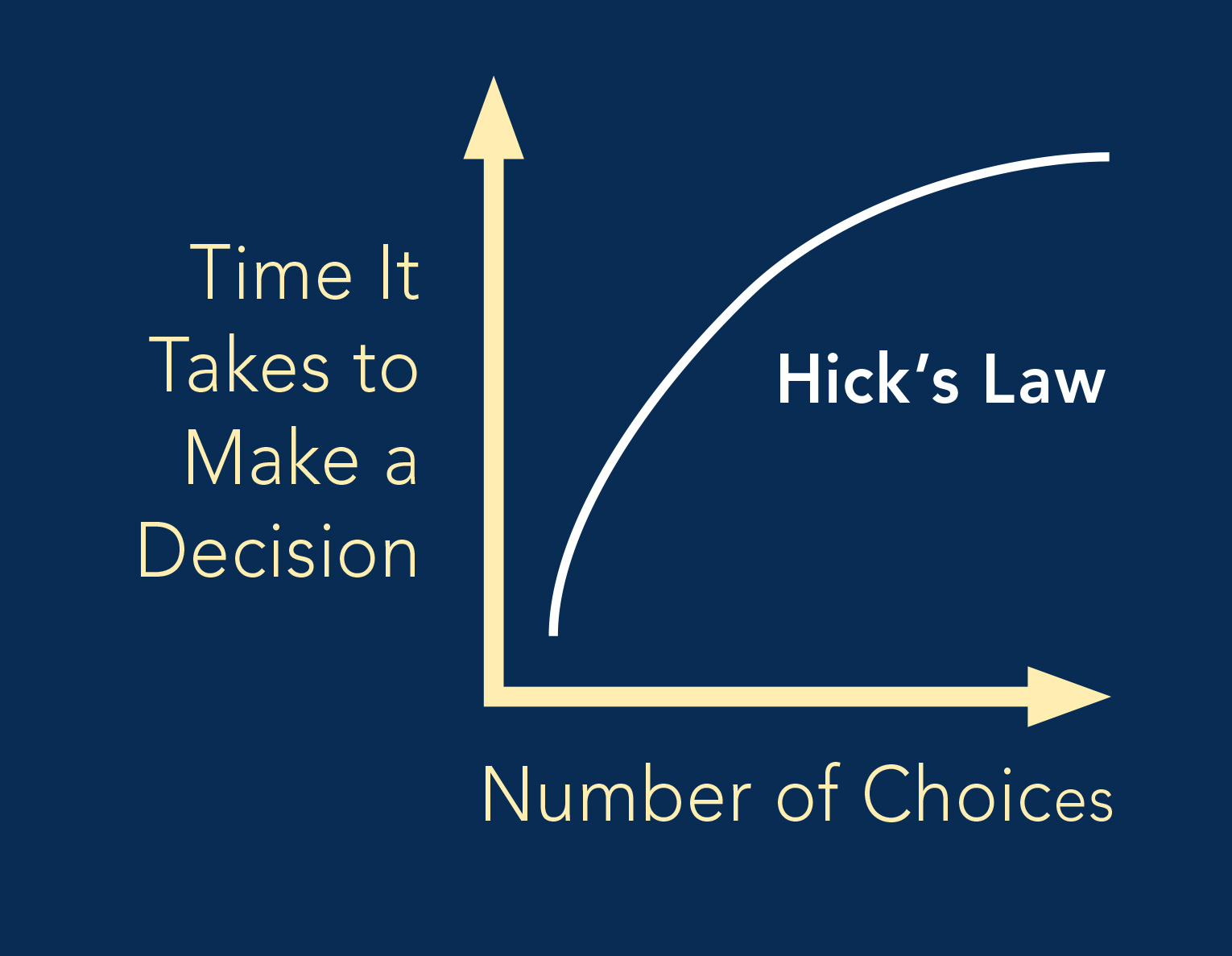 How do you know that the suspect will be vulnerable to the one or two techniques you choose? What if the technique you choose to teach all your people happens to be the strength of the bad guy they are fighting tonight? Do you think adhering to Hick’s Law will save your officer tonight? An effective training curriculum is one that teaches principles and concepts first, and then uses technique to deliver those principles. At the core of your “system” should be the concept that you should dominate position regardless of the technique you choose to teach or train. Hick’s Law is correct — you should not have a collection of techniques as your base curriculum.

The reality of the counter principle can also be explained with this: If you only have one option, it is not an option, it is a necessity; it better work. If you have two options, it is a problem: which one should I use? This can cause a delay, and your inaction can lead to defeat. If you have three or more options, you have created a dilemma for your suspect, and the officer has legitimate choices and options. If one option or technique doesn’t work or is countered, that is no problem. Due to having a dominant position, I have the time to transition to the next option. If something doesn’t work, regardless of the reason, well-trained officers will switch to another option and continue to pursue their ultimate outcome, which is custody and control. They don’t get frozen or stuck on any single option, or attempt to pick the “perfect” option.

I recognize the legitimacy of Hick’s Law as it relates to not being a “collector” of techniques, so how do I justify the apparent contradiction I teach above? Effective training provides an answer for Hick’s Law for a couple of reasons.

First, I teach that officers should stay outcome-based. In other words, options and techniques trained should lead to a clearly defined outcome. For regular police work, the desired outcome is custody and control.

Second, the curriculum should be principle- and concept-based. The techniques an officer may use are interchangeable and really don’t matter, as long as the technique an officer chooses does not violate any established principles and leads to a desired outcome of custody and control. At the heart of any DT curriculum should be the idea that dominant position should be sought throughout the encounter. I teach officers to carry out this dominant position strategy by consistently trying to deliver on some key principles.

Second, a key principle is to consider potential transitions throughout the whole encounter. The officer may transition from empty hand to weapons, defense to offense, or vice versa. The officer can decide whether to stay attached or disengage, or go from one technique to another. If an officer stays committed to the concept of consistently transitioning from one position to the next, from one technique to another, always working to gain more control of their suspect and ultimately get them into custody, then the officer will not be defeated or paralyzed by either the counter principle or Hick’s Law. If something is not working, the officer can move on to another option. All of your training should be showing you transitions that lead to your LEO outcome of custody and control.

Third, the officer should maintain the ability to disengage from the suspect if the officer feels they need more resources, they are losing the position they are in, or if the officer wants space to transition to a weapon system. The officer may also make the decision that they no longer want to be attached or engaged up close and personal to the suspect.

One of the most dominant positions an officer can achieve is an angle. The angle allows the officer to continue to be mobile and respond to counters by the suspect. This can be defined as any time my hips face the suspect and the suspect’s hips face away. By this definition, an angle is only achieved if I am offset from the suspect to one side or I am behind them, and I am squared up to them. I can create an angle whether I am close to the suspect or far away, but space allows the suspect to easily counter the angle by turning to face me.

An angle is such a dominant position because from an angle, an officer does not have just one or two options — they have multiple options. They can stay attached, disengage, strike, use a weapon or execute a takedown. When training puts officers in a position that accounts for the fact the options may fail, but the officer can still actively choose where the fight will take place, the officer can stay in control of the encounter.

Willingly going out and facing violence and danger in your regular work day is one of the most daunting and rewarding challenges anyone could accept. Training should put officers in a position to dominate their opponents. This requires the officer to dominate position throughout the encounter. Ultimately, compliance is the goal of any encounter with a suspect, but officers cannot choose when a suspect will comply or resist arrest. When officers achieve dominant positions, suspects often “feel” dominated, and that can lead to a resistant suspect changing their mind and becoming compliant. If the suspect continues to resist from an inferior position, the officer is in a better position to dominate the suspect, control them and ultimately take them into custody.

The principles in this article are just a few that officers can use in an encounter. Whatever the officer decides to do, if they have been trained in a principle-based system, they will not be brought down by the challenges of Hick’s Law or being technique-based. Officers should be living, breathing problem solvers who stay outcome-based and adapt well throughout the fight. Keep training to develop the ability to establish dominant positions, which will give you multiple options to control and dominate your suspect. Then go train it some more.