It had been 39 years. A vast majority of our officers pushing a black-and-white today were not alive the last time this game had been played. Today, at 50 years old, I was 11 the last time these cops (The Mean Machine) took the field to play the fire department (The Porkchoppers) in the 10th and final installment of the police/fire rivalry.

I came up to the Association full time in December of last year. Every day, walking into the office, I passed by two flyers hanging on the wall behind Roy’s desk. The flyers were from the 1976 and 1977 Police vs. Fire football games. The two flyers were a snapshot of our Department’s history. But as is always the case, there was much more to the story.

One day, while standing near Roy’s desk, Steve was looking at the flyers and said to no one in particular, “Wouldn’t it be incredible if we could do something like this again?” I’m not sure anyone took him literally at first. However, throughout the next couple of days, we began to have conversations about not only the logistics of pulling this event off but making it successful.

After the decision was made to go forward, a date was set. May 7, 2022, would be game day. The next 90 or so days would be hectic, but each day we made progress in organizing the event. One day leading up to the event, Steve had the idea of researching who all the previous players were and inviting them to the game. That idea was a great one, but trying to identify and track down each of the players was easier said than done.

Fast-forward to game day. We arrived at Bonanza High School, home of this year’s game, several hours early to set up. While completing preparations, a lady walked up and introduced herself. She was the daughter of retired LVMPD Officer Dan Purdy. She told me her father had just had major surgery one week prior and that her dad had heard about this game and was not going to miss it. She was concerned about his health and safety, seeing as it would require him to walk a significant distance and get into the bleachers.

Dan’s daughter said he was sitting in her pickup, so naturally, I wanted to say hello and introduce him to our crew. We spent the next half-hour or so learning about the history of this game from a player’s perspective. Dan was in a unique group. He was one of only eight LVMPD officers who had played in all 10 games. It was quite the history lesson.

During the game, I had an opportunity to sit with these men for a short time and visit. It was not until then that the gravity of what was happening that night hit me. It was an absolute privilege to sit with my brothers, who had done this job and paved the way for my generation of police officers. To be able to witness how excited and proud these guys were was a gift. The significance of the passage of time hit home when Roy Chandler provided me with the names of players who had passed.

After speaking with Roy, I learned the name “Mean Machine” came from the movie The Longest Yard, filmed in 1974. I asked Roy how the fire department came up with the name “Porkchoppers,” but he did not know. It wasn’t until a chance encounter with an old family friend last week that I learned the answer to that question. Francis Moore worked for the Clark County Fire Department and did so during the football era. I asked Francis if he remembered the games.

His response surprised me. Francis told me that of course he did and that he played in all 10 games. He took probably a little too much delight in reminding me that the fire department won most of the games as well. I asked Francis how they came up with the name “Porkchoppers” and he laughed. I asked him to explain, and he proceeded to tell me it was because they were beating up on the pigs!

We both laughed, me not as much as him, though (haha). After telling him about the game and that we were trying to rekindle a little bit of our history, he asked me who won the game. I was proud to tell him the police did, 34–0. And then we laughed. Or, at least I did — him not so much!

This year’s game was a tremendous success. What was accomplished in such a short time was incredible. I believe that very few of us truly appreciated how big this event was going to be — not just in what was accomplished that night and leading up to it, but in the scope of what it meant to so many people.

Below are a few statistics from the old games. It includes some of the names of the Metro officers who played. I realize that not all of those who played are mentioned. Moving forward, I plan to compile a list of every officer who played and will memorialize that in a future article, maybe even the article leading up to next year’s game.

It is the Association’s goal that for next year’s game, every player from The Mean Machine and The Porkchoppers will be sitting in the stands together watching the pigs, I mean cops, beat up on the firefighters once again. We hope to see you there!

If you have any details, players’ names or fun stories or photos from the old games, please reach out to me. I would love to share them with our members. My email address is gstinnett@lvppa.com.

Ten-Year Veterans: The Following LVMPD Officers Played in All 10 Games 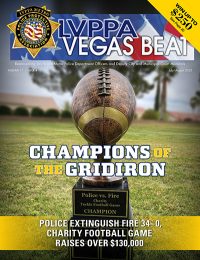