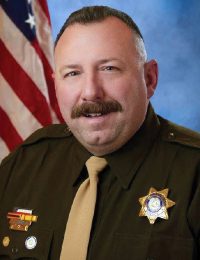 I would like to take this moment to introduce myself. My name is Gregory Stinnett. I began my journey with Las Vegas Metro in September 2003, entering the Academy as a police recruit.

Being a native of Henderson and coming from a law enforcement family, I was always aware of the status Metro police held in this valley. I remember standing in lines with over 1,000 other people vying for one of the few Academy spots available. This was quite literally one of the hardest career paths to attain in the Las Vegas Valley.

After completing field training in Northeast and Bolden Area Commands, I settled in at Southeast Area Command, where I spent the next 12-plus years as a patrol officer. While at Southeast, I worked in the Problem-Solving Unit and had a short stint in the Community-Oriented Policing Unit.

Southeast was and still is a dynamic area to police. During my time there, I was fortunate to work and partner with some of the best street cops I’ve ever encountered, handling countless critical incidents.

Throughout my patrol career, I had been a guest (against my will) of the Internal Affairs Bureau several times. However, in 2016, I decided to work there. Working in IAB was never on my radar, and quite frankly, I had no desire to do so until I had an opportunity to speak to an old partner who was transitioning out of IAB for a different assignment.

What he already knew, and what I was to learn, is that it is an incredible responsibility. While it is a given that upholding the integrity of the Department is essential in maintaining trust within the community we police, defending and upholding the integrity of the men and women who police it along with corrections officers and the civilian support staff is a privilege.

Although I would never do that job again, it was an honor to be a voice advocating for an employee who did their job appropriately, oftentimes, without that employee ever knowing their actions were questioned.

Since then, I’ve spent the last few years assigned to the Airport Bureau. When I transferred there in 2018, it was without question the most senior bureau within the Department. The amount of institutional knowledge possessed by the officers working at McCarran is incredible. While there, I’ve had an opportunity to reunite with old friends and make many new ones. I can honestly say I didn’t have one bad day working there.

The 100-plus officers and supervisors assigned to McCarran International Airport ensure that the roughly 4.5 million people per month transiting through the airport can do so in a safe manner.

Since 2018, I’ve sat on the Board of Directors for the Las Vegas Police Protective Association, representing the officers assigned to the Airport Bureau.

Recently, I was selected to sit on the Executive Board of the LVPPA. I asked to be considered for this position because I believe I can make a difference for the members of this Association.

I want to continue the fight for legislation supporting law enforcement and strengthening police officers’ bill of rights. I believe it is critical for us as a profession to identify which public officials will fight for the men and women who lay it on the line every day to protect our community.