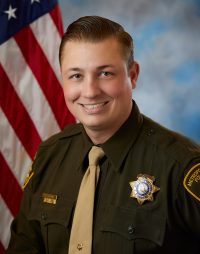 Dan was born and raised in northeast Ohio.  He moved to Las Vegas at the age of 21, in January of 2008, when he was hired by the LVMPD as a police officer.  Dan worked for 8 years in patrol, working at Enterprise, Northeast, and Convention Center area commands.  In 2016 Dan entered the LVMPD Corrections academy and spent the next 4 years working as a Corrections Officer and was assigned to the North Tower Bureau and the Alternatives to Incarceration section.

Dan is a firearms, defensive tactics, and TASER instructor with LVMPD as well as a certified active shooter response and tactical medical instructor through FLETC.  In October of 2017, Dan was elected to the LVPPA Board of Directors representing the Detention Services Division.  While on the board of directors Dan has served on the contract negotiation team, the charity board, and the retirement committee.  In August of 2020, Dan was appointed to the LVPPA Executive Board.