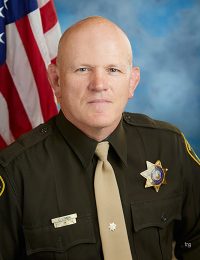 Chad was born in California and moved to Phoenix, Az when he was 12 years old. Chad lived in Phoenix until he served a two year mission for The Church of Jesus Christ of Latter Day Saints when he was 19 years old. Shortly after returning home in 1990 Chad married Kayleen Cuthbertson, and together they have raised their 8 children. (3 daughters and 5 sons) Chad and Kayleen are still happily married today.

Chad and Kayleen moved their family to Portland Oregon so that Chad could attend Portland State University. Chad was accepted into the Police Corps Program and earned a BA from PSU in Administration of Justice. Chad also earned a special Emphasis in Terrorism Studies and a Minor in History. Chad graduated in 1998.

Upon graduation from PSU Chad began his policing career with the Portland Police Bureau where he served for almost 6 years. In February of 2004 Chad and Kayleen moved their family South to Vegas where he went to the academy and went to work in patrol here at LVMPD. During his policing career since 1999 Chad has served in patrol, as an FTO, in Gangs as a Detective, in SWAT, in the Mobile Crimes SAT Team, and as a staff member at AOST. While at AOST Chad was elected as an at large rep and served in that capacity until he was appointed to the LVPPA Executive Board in 2018.

Chad has supplemented his LVMPD training and experience with extensive training and teaching away from the Department. Chad attended and graduated from the 5 day certification course taught be Dr. Bill Lewinski of the Force Science Institute. Chad has been blessed to teach and train Nationally and Internationally in combatives, use of force, firearms, and tactics and earned several additional certifications. Chad has supplemented his LEO training, teaching, and experience with regular training and coaching of BJJ/MMA since 2000 to the present. Chad is a BJJ Black Belt and continues to train and coach to this day.

Chad currently serves as a Director on the LVPPA Executive Board and is grateful for the opportunity to use his training and experience to assist LVMPD PPA members as they serve the Las Vegas Community. If you need anything Chad can be reached at clyman@lvppa.com.