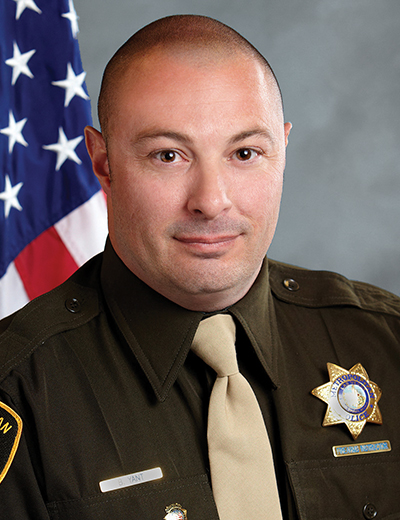 Bryan is from Canton, Ohio. He joined the United States Marine Corps in 1996 as an Infantry man and obtained the rank of Corporal. He was hired by Las Vegas Metropolitan Police Department in 2000. He was assigned to Northwest Area Command. While assigned there he worked Patrol, as a Field Training Officer, and in the Problem Solving Unit. He has been a firearms instructor since 2006. He then transferred to Narcotics Squad 8 in 2008. In 2011 he was assigned to the Southern Nevada Counter Terrorism Watch Desk. While assigned there he became the Headquarters Building B PPA representative. In 2014 he helped establish the Real Time Crime Center utilizing the Public Safety cameras along Las Vegas Blvd. He was appointed to LVPPA Executive Board in 2014 as the Secretary, and currently serves the membership as the Sergeant-at-Arms.

In 2015 Bryan attended the 5 day certification course taught by Dr. Bill Lewinski of The Force Science Institute. In 2016 Bryan was selected to attend the Advanced Specialist In The Behavioral Analysis of Force Encounters course taught by The Force Science Institute. Bryan successfully completed this course and is a certified Advanced Force Science Analyst, with a focus in the areas associated with human factors, including the intricacies of human movement, action/reaction times, how the mind works during rapidly unfolding events, and decision-making under stress. Bryan has also completed the 2 day Forensic Video Review certification course presented by Grant Fredericks of Forensic Video Solutions. Bryan has also completed the Force Investigation Strategies & The Cognitive Interview Process certification course taught by Ret. Sgt. Jamie Borden of Critical Incident Review. Bryan has represented hundreds of officers involved in officer involved shootings, use of force investigations, criminal interviews, administrative reviews, and criminal court proceedings since 2014. Bryan continues to represent officers in use of force investigations to this day.