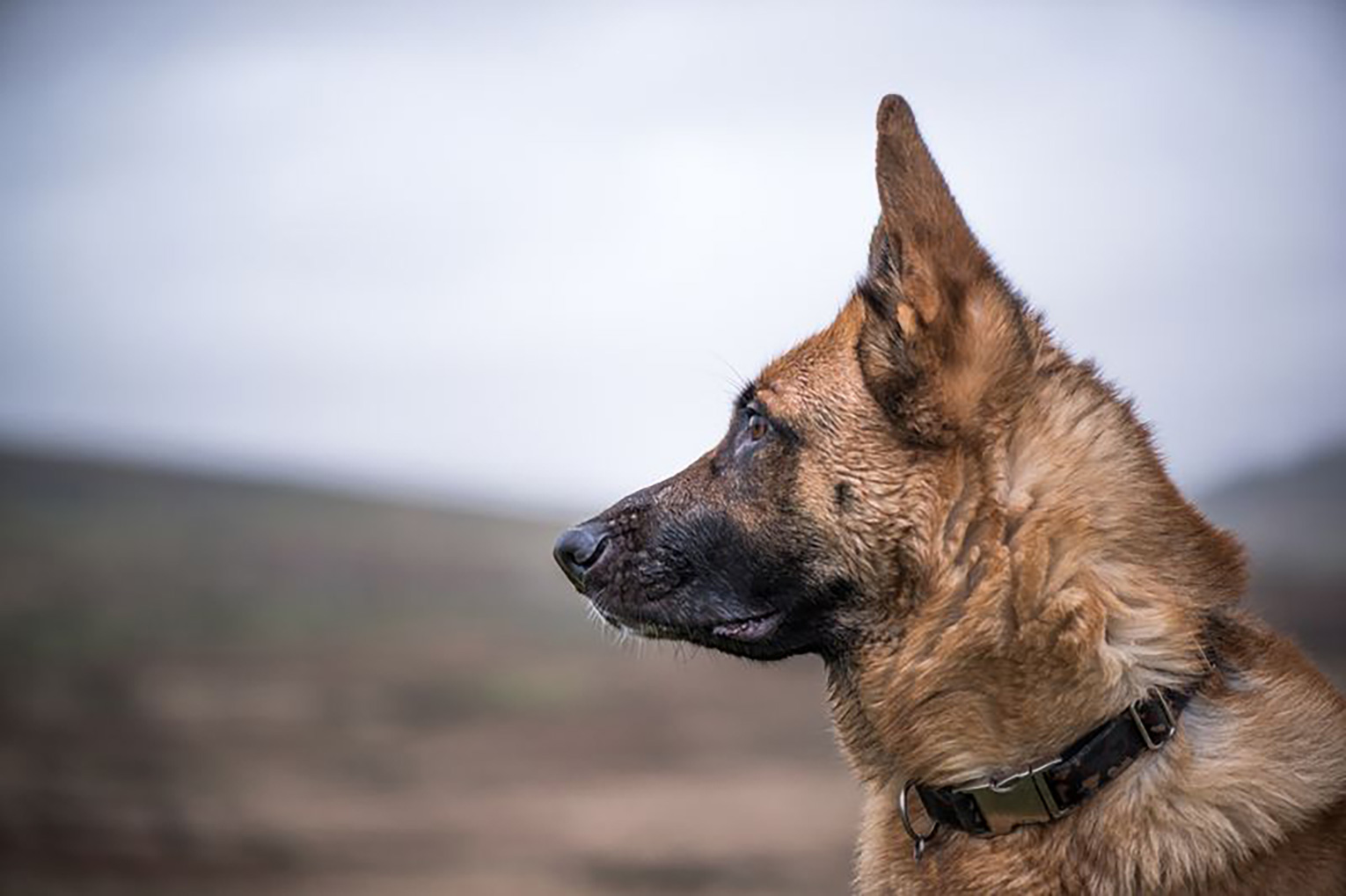 LAS VEGAS (AP) — Jason Dukes was 16 the first time he was tackled and bitten by a police dog. He asked for it.

“I fell in love,” Dukes recalled this month. “From that moment on, I knew I wanted to become a police K-9 handler.”

It was at a 1994 police conference, during a presentation from a Reno K-9 officer. Dukes attended the conference as a Metropolitan Police Department “Explorer,” a participant in a program designed to give young men and women a chance to explore a career in law enforcement.

The officer, holding up a padded sleeve, asked if anyone wanted to “take a bite” from his police dog. Dukes was the only one in the group brave enough to volunteer.

“While my friends in high school were still looking for what they wanted to do, I couldn’t think of anything more exciting than chasing down bad guys and having a dog with me to do it,” he told the Las Vegas Review-Journal .

The Review-Journal spent three days, between late August and early October, with him and his team to gain an understanding of an average day in the life of a Las Vegas K-9 officer.

For Dukes, that means getting up while most people are still asleep, at 3:15 a.m.

It’s been a little more than two hours since the start of Dukes’ shift when a burglary report is broadcast on the police scanner.

This particular Wednesday morning is abnormally quiet. Dukes had spent the better part of the morning driving around the valley. “Proactive policing,” he calls it. More often than not, he’ll end up in east Las Vegas, an ode to his days as a patrol officer.

Dukes assigns himself to the call, flips on his lights and sirens, and drives toward a storage facility in the central valley. As the sirens blare, his patrol dog, Argos, and bomb detection dog, Darko, perk up with excitement. While in the car, the two Dutch shepherds sit in large steel cages, replacing what would be a standard back seat.

Minutes later, Dukes pulls into the parking lot of the storage facility. But it’s a false alarm, according to the patrol officers already at the scene.

Burglary calls are standard for K-9 officers between 4 a.m. and 6 a.m., according to Dukes, although the section’s “bread and butter” is foot pursuits, barricades and search warrants.

“One of the keys to using a canine is we can clear a building, a large building in particular, more efficiently and more accurately than officers who go and search it by hand,” Dukes explained. “So what would take an officer about an hour to clear a large business, we can do it in about 15 to 20 minutes with the dogs.”

A woman calls 911, screaming that she had just been stabbed in the head by her adult son. Now, a dispatcher relays to officers, her son is barricaded inside his family’s home.

Dukes and another K-9 officer, Remi Damole, head to the southwest Las Vegas neighborhood. Patrol officers and crisis negotiators have already surrounded the house but wait for the K-9 units to arrive.

“Every barricade you’ll have two to four dogs,” says Dukes.

Damole and his patrol dog, Dasco, are close behind him and take what officers call “rear containment.”

Damole, Dasco and a patrol officer — who will act as Damole’s “cover officer” — set up in a backyard adjacent to the home, in case the woman’s son tries to sneak out of the back of the house.

The cover officer is there to watch Damole’s back, “because I’m not working my gun. I’m working my dog,” he says.

At the same time, Dukes and Argos, the patrol dog, are in front of the house, attempting to take the woman’s son into custody. He eventually surrenders without either of the K-9 dogs being deployed.

“Sometimes the mere presence of the dog, they will hear that loud bark, and it’s enough to get the bad guy to surrender,” Dukes says.

Dukes meets four other day shift K-9 officers at a large vacant office space for training. Metro’s day shift K-9 squad trains together on a daily basis, usually in the morning. On this particular day, the dogs practice searching for a hidden “bad guy.”

Officer Rafael Camacho is working as the decoy. Officers who want to test for a spot in Metro’s K-9 section must do decoy work for at least six months, so Camacho steps into a large padded suit designed to absorb most of the pressure from a dog’s bite, and then hides inside a large room in the building.

Rounding the corner at the end of a dim hallway, Damole cracks open a door that leads to another hallway and kneels down. Camacho, the “bad guy,” is hiding behind another closed door.

Dasco sits in front of Damole, ready to charge. Panting, he barks and barks.

“That’s a real dog, not a police officer barking,” Damole yells. “I’m going to send a police dog in there. When he finds you, he will bite you.”

Camacho is silent. Damole lets Dasco off the leash, and he sniffs several doors. When he barks at the right door, Damole opens it for the dog, who finds Camacho and bites his arm, taking him down to the floor.

“Stop fighting my dog, bad guy,” Damole yells at Camacho, who is pretending to get out from under Dasco. The dog growls, showing teeth, and bites down firmly into the padded suit. Dasco does not waver.

The dogs, Dukes later explains, are trained to hold the bite until their handlers command them to let go.

“These dogs are so tough,” Dukes says with a hint of pride. “We’ve had our dogs shot, stabbed, and they’re still fighting. We’ve had dogs hit in the head with crowbars, their skulls fractured in the middle of a fight, and the dog still holds on.”

The radio crackles to life. A 911 dispatcher puts a call out for backup. Officers are running after a stabbing suspect near downtown Las Vegas.

K-9 officer Scott Murray beats Dukes and Damole to the punch and takes the call. He turns his sirens on, and his patrol dog, Beer, barks and spins in his cage. As they inch closer to the scene, the dispatcher broadcasts a description of the suspect.

Near 11th Street and Bonneville Avenue, a man matching the description dashes by. Murray slams the brakes, hops out of his patrol car and lets Beer out. He’s barking and tugging on his leash.

At the same time, other patrol units close in. The suspect sprints into the gated complex, and the officers lose him. Murray thinks he might bag “a running bite” today — until the suspect re-emerges at the back of the complex, where he is taken into custody.

Murray leads Beer back to their car. The patrol officers can take it from here.

Dukes and his dogs head home for the day.

The K-9 handlers are responsible for the dogs’ care. So unlike other officers, after a long day at work, Dukes still has to feed and groom the dogs. On some days, he’ll also take them to the park or a remote desert area to run around and “blow off some steam.”

Dukes walks around to the front of his house, unlocks his front door and is greeted by Maddie, his 14-year-old retired narcotics dog. After the dogs retire, Metro sells them back to either their handler or a retired K-9 officer for a small fee.

That’s because even though their aging bodies tell them they physically can’t handle the police work anymore, their minds tell them that they still can. “So they could still bite,” Dukes said.

But aside from liability reasons, Dukes said, K-9 officers often will buy their retired dogs from the department “because they’re family.”

“I spent the last 14 years of my career with two patrol dog partners and one detection dog partner, and I’ve grown attached.” Dukes said. “I love each dog that I’ve been blessed to work with.”

Maddie, walking slowly because of her bad hips, follows Dukes through the living room and into the kitchen, where Dukes scoops food into her bowl.

While Maddie eats, Dukes takes more food out to the side yard for his K-9 partners. Opening the car doors for the dogs, Dukes removes their collars and steps aside, allowing them to jump out of the SUV and run straight to their kennels.

Dukes shuts the gates to their kennels, and Darko and Argos slurp their water and eat.

“Oh, you guys are so happy, aren’t you?” Dukes says in that voice people use when talking to animals and babies.

Darko and Argos briefly look up from their food bowls, and as if performing a choreographed dance, the two spin in circles, wagging their tails.

Dukes and Darko will retire together in December 2020. Dukes, 42, is excited to spend more time with his wife, two kids and the dogs that kept him alive while on duty.

As for his K-9 partners, “I owe it to them to give them the best retirement that I possibly can and let them be a dog for the last few years of their life,” he said.