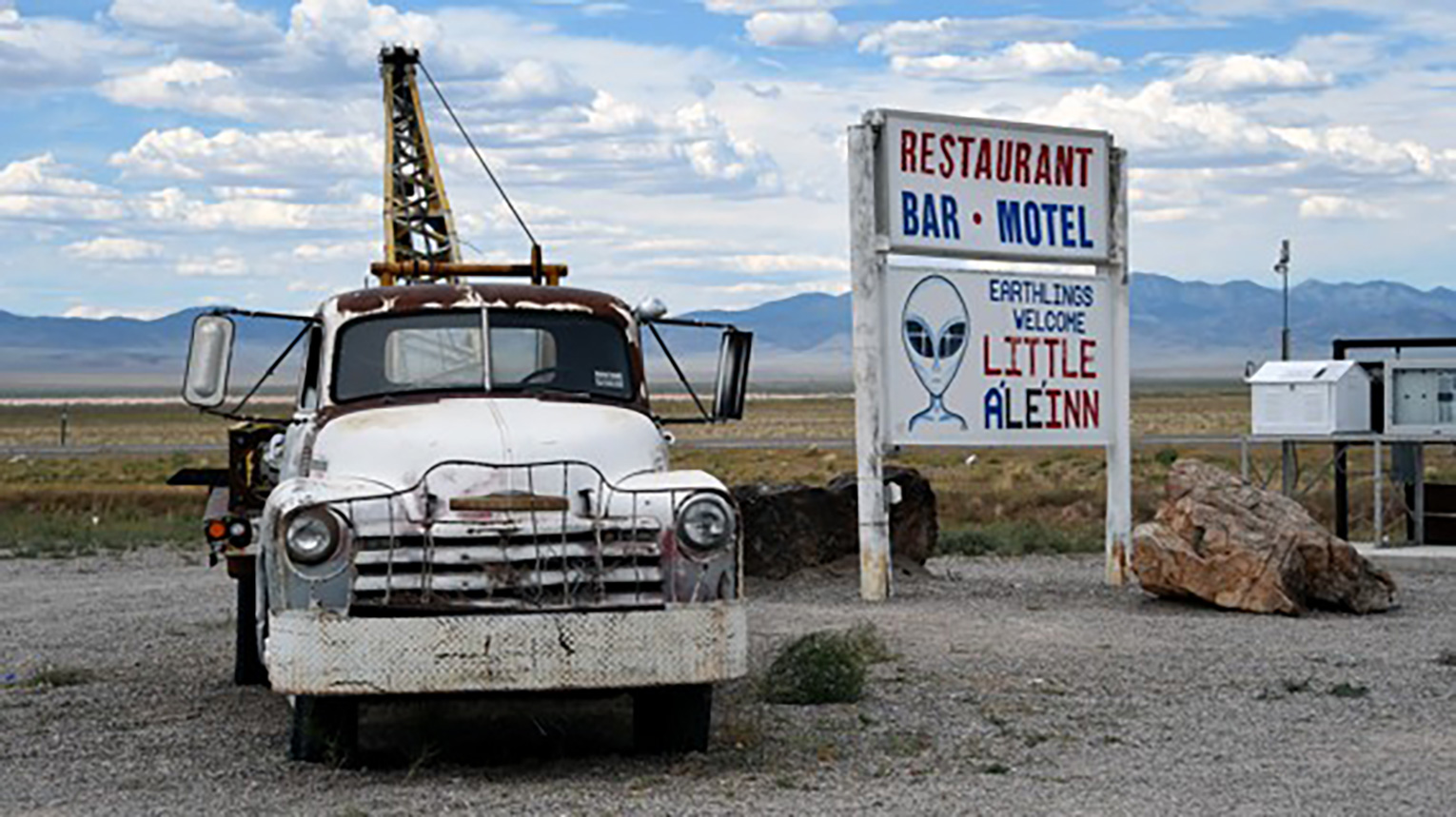 The Facebook event may have started in jest, but local officials are bracing for mayhem.

Linda Looney, a manager at the Alien Research Center in Hiko, Nevada, is no stranger to unlikely theories and wild schemes. Even so, when she first saw on Facebook that thousands of people were planning to storm the nearby Air Force base known as Area 51, she thought it was a joke. She didn’t understand what it meant to “naruto run” or how doing so would allow anyone to “move faster than … bullets,” but she was sure the military would put an end to the shenanigans.

In her two and a half years working at the Alien Research Center (which produces zero scientific research, but does offer a kick-ass selection of more than two dozen alien-themed magnets), Looney has seen her fair share of Area 51 aficionados. She’s spoken with believers from all over the world, from Iceland to Zimbabwe. Some come out of curiosity. Others are adamant that aliens secretly live among us. A few even claim to have been abducted. So when the guest list for the “Storm Area 51, They Can’t Stop All of Us” Facebook event began to climb into the tens of thousands, then the hundreds of thousands, then the millions, Looney understood that, for many people, this was more than a gag. It would be fun, she thought, not to mention great for business.

So did much of southern Nevada. This past week, Lincoln and Nye Counties issued declarations of emergency in preparation for the crush of humanity expected to descend on the area on September 20. More than a half-dozen local, state, and federal agencies are involved in the planning, including the Las Vegas Police, the Nevada Department of Public Safety, and the state highway patrol. Governor Steve Sisolak’s office has been briefed and is monitoring the situation. And when the alien enthusiasts arrive, 200 to 300 police officers, medics, and firefighters will be on hand to receive them.

“We have been nonstop preparing for the past few weeks,” said Lincoln County Sheriff Kerry Lee, who has been convening daily with county officials and weekly by phone with the state’s Department of Public Safety. Even the FBI has gotten involved, he told me.

Lee, a friendly man with a thick mustache, has seen plenty of Area 51 trespassers in his day; apprehending them is just part of his job. Most months, three or four cross the boundary—a remarkable rate, given that trespassers usually face a $1,000 fine and up to six months in prison. Once, Lee stopped a bus carrying 17 people. But the past month has been unlike anything he’d seen before.

By mid-August, more than a month before the event, visitor traffic had already spiked 1,700 percent. And while most of those out-of-towners have come just to look around, some are more enterprising: A few weekends ago, police apprehended seven trespassers in the space of 24 hours. The Alien Research Center, meanwhile, has had almost 20 times as many daily visitors as it did a few months ago. Usually, Looney said, she can go an entire day without seeing 50 visitors; now she sometimes counts 50 at the same time.

These visitors, the emergency planners think, are only the advance guard. Based on social-media monitoring, on-the-ground observations, and motel and rental-car reservations, officials are anticipating that roughly 30,000 people will show up on September 20, says Varlin Higbee, vice chair of the Lincoln County Board of Commissioners.

So far, Lincoln County has sanctioned two events for the weekend of the supposed storming. One, featuring a lineup of prominent ufologists, will be hosted by the Alien Research Center in Hiko. The other, dubbed Alienstock, will be hosted by the Little A’Le’Inn in nearby Rachel and will take the form of a more standard EDM festival (“celebrating aliens,” of course).

If it seems like the two events are walking a fine line between encouraging good clean (conspiracy-theory-fueled) fun and endorsing a massive act of (also conspiracy-theory-fueled) criminal trespassing, that’s because they are. The Hiko event warns on its website, “There will be no misguided ‘storming’ of an active military installation that defends our national security.” But its title—“Storm Area 51 Basecamp: Get Abducted at Your Own Risk”—does send a confusing signal. The Alienstock organizers have eschewed mixed messaging in favor of no messaging; the word storm cannot be found on their website at all.

For Hiko and Rachel, the tourist surge could pose major problems. The pair of desert towns has a combined population of just over 150. The nearest hospital is more than two hours south, in Las Vegas, and the closest gas station is 20 miles from Hiko and 45 from Rachel. County officials expect traffic to grind to a halt and cellphone service to crash when the sheer volume of calls overwhelms the region’s meager communications infrastructure. The Rachel town website predicts that Alienstock will turn into “Fyre Fest 2.0” and notes, rather ominously, that “in the absence of law enforcement local land owners will step up to protect their property.”

Read: Why people paid thousands of dollars to attend a doomed music festival

“There will probably be no water … because everything’s going to sell out,” said Jon Koenig, the chairman of the Nye County Commission, during a public meeting. “There will be no gas left in the gas stations. No food. Nowhere to go potty.”

Despite all that, Lincoln County has signed off on the events at the Little A’Le’Inn and the Alien Research Center for the same reason high-school administrators host after-prom parties: to control the inevitable, or at least to try. “The county feels like if they didn’t approve the event, it doesn’t matter,” Lee told me. “The people are coming anyway.”

The thing about school-sponsored after-proms is that, one way or another, the high schoolers still end up lying trashed and facedown in the basement of that one kid whose parents are “like, really chill.” Ultimately, all the school can do is hope and prepare; so too Lincoln County, Nevada.

“Maybe they won’t come, maybe all this is for naught, maybe we’ve done all this planning and 500 people come,” Lee said. “But we feel like we can’t be behind the eight ball here. We’ve got to plan ahead for the worst-case scenario.”