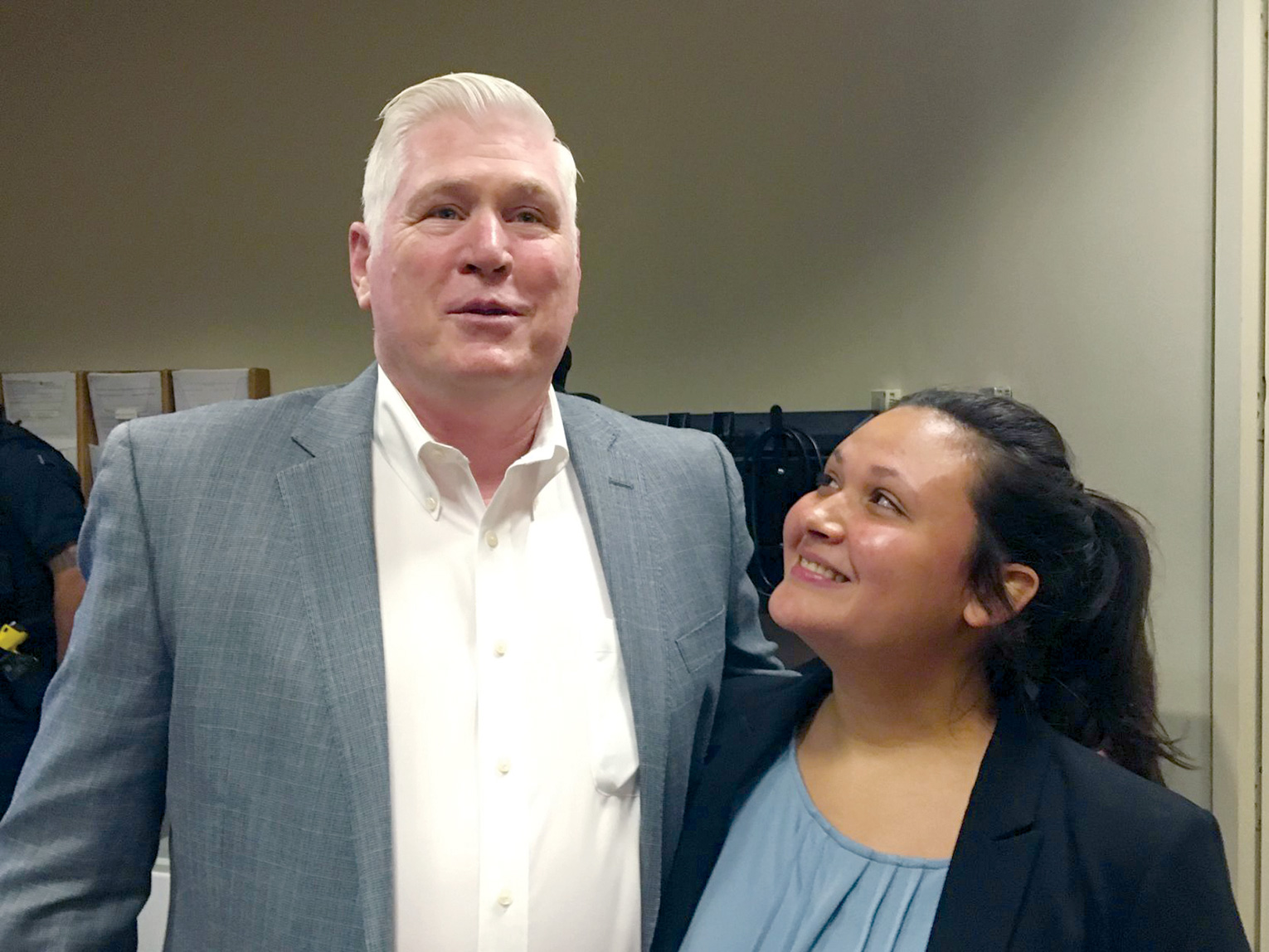 NORRISTOWN — As Karissa Rivera dreamed of becoming a Montgomery County deputy sheriff she kept on her desk a framed photograph of the Las Vegas police officer who inspired her as a little girl to pursue a career in law enforcement.

On Monday, Rivera, 22, of Horsham, beamed with joy as her mentor, William Thomas Stockdale, a retired sergeant with the Las Vegas Metropolitan Police Department, surprised her by attending her swearing-in ceremony.

“Oh my goodness! Good to see you,” an emotional Rivera said as Stockdale, a towering man, approached her with a look of pride while acknowledging her accomplishment.

“Good to see you,” Stockdale responded as he hugged Rivera, who as a child he taught while working as an officer with the Drug Abuse Resistance Education program in Las Vegas.

Rivera, originally from Las Vegas, and Stockdale, who retired in July 2017, hadn’t seen each other in more than a dozen years.

The surprise reunion was arranged by Rivera’s co-workers in the sheriff’s department, who noticed the photograph she had on her desk, a cherished memory of her posing with Stockdale during her participation in the D.A.R.E. program he oversaw.

“She told us that experience inspired her to wanting a career in law enforcement. This is really truly a pleasure and a treat today,” county Sheriff Sean P. Kilkenny said as he invited Stockdale to be a witness at Rivera’s swearing-in ceremony at the county courthouse.

Rivera, a graduate of William Tennent High School who earned an associate’s degree in criminal justice from Bucks County Community College, had worked in the civil processing division of the sheriff’s department since September 2018 and recently completed the training to become a deputy.

Stockdale said Rivera was one of the 7,000 fifth graders he instructed about the dangers of substance abuse while working with the D.A.R.E. program in Las Vegas.

“You wonder if D.A.R.E. works, what impact it has on people. You can only hope you have an impact on children. But a story like this, it was well worth it. This shows me that it was a program that was successful,” Stockdale said.

“I had such a positive impact that she kept that picture of me, the two of us from 16 years ago, on her desk. That just blows my mind. It’s phenomenal,” Stockdale added.

Stockdale is no stranger to Montgomery County as he was a U.S. Army recruiting commander from 1990 to 1993 and had stations in Pottstown, Norristown and Lansdale.

Rivera, supported at the ceremony by relatives, said she was expecting the ceremony to be short and casual. Rivera did not notice Stockdale sitting in the audience as she awaited her turn among other new recruits to take the oath of office as a deputy.

It was only when Kilkenny invited Stockdale to come forward that Rivera recognized the name from her past and realized the mentor from her childhood was in the room.

“I wasn’t expecting any of this at all. When I saw him, I felt like my jaw dropped to the ground. I was shocked. I was so surprised,” Rivera gushed afterward. “It means the world to me. It’s important that someone I looked up to came here because they believed in me. This journey has been a long one and I’m grateful.”

“She lit up. It was a great surprise. I’m glad it was a pleasant surprise for her,” Stockdale added.

During an impromptu moment after Rivera took her oath as a deputy, Stockdale told her, “I couldn’t be happier or more proud of you for what you did. I’m honored to be here. I really am. Keep up the good work.”

Corporal Bryan Subbio had the job of tracking down Stockdale, relying on the photograph co-workers observed on Rivera’s desk.

“The story of the Las Vegas D.A.R.E. officer kept coming up,” recalled Subbio, who contacted Las Vegas authorities who put him in touch with the now retired Stockdale. “It’s a great story. It’s amazing that it worked out the way that it did.”

Subbio recalled the first time he spoke with Stockdale on the phone and explained to him the nature of the call.

“It was awesome. It was a long process to get to that point. You could tell he absolutely was touched by the story and excited he could impact a student’s life like that,” Subbio said.

It was the greatest kept secret in the department as co-workers were able to hide the fact they had contacted Stockdale about attending the ceremony.

Stockdale, who attended the event with his wife, Kathy, said he didn’t hesitate making the trip east when he learned he had inspired Rivera, as a 10-year-old girl, to consider a career in law enforcement.

“I told my wife, ‘We’re going.’ When I heard the story about the picture and the department saying that she’s such a wonderful person, I had to come out and support her. There was no ifs ands or buts about it, I had to come out,” Stockdale said.