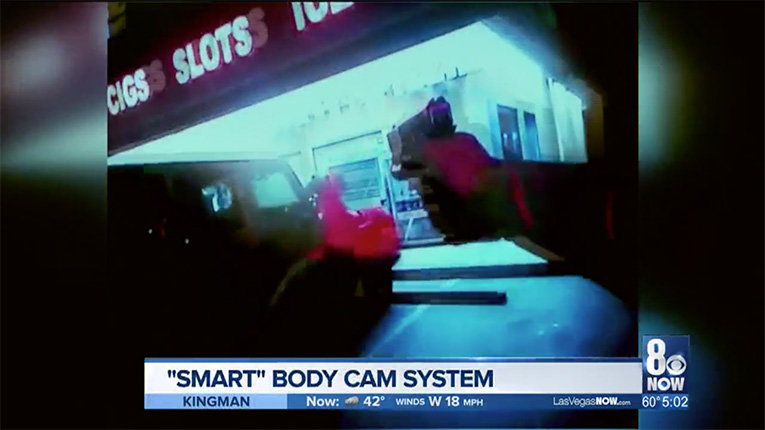 As body cameras become more widely used across the United States, different companies are working on ways to improve the technology.

That includes a smart body camera system which automatically turns the camera on when a police officer pulls out his or her gun.

An issue police departments are seeing with body-worn cameras is an inconsistency in when they are activated during a call.

One company is trying to make that into a more automated process.

More and more officers, including in the Las Vegas valley, are wearing body cameras. They provide a wealth of information, but sometimes officers fail to activate them during a crucial event.

“A lot of times, the officers don’t know if the situation is going to progress to a more aggressive situation,” said Terry O’Shea, chief technology officer, Safariland.

Police equipment manufacturer Safariland is showing off its connected activated system, including a smart holster that automatically turns on an officer’s body camera and notifies dispatchers during a potential use of force situation.

The whole idea behind this is to make the officer’s job as easy as possible so the officer doesn’t have to think about turning on the camera when deploying his or her weapon.

“When the weapon’s withdrawn from the holster, the blue light comes on, that indicates that the message has been sent out,” O’Shea said.

A noteable example in Las Vegas of when a body camera was not activated was when Seattle Seahawks star Michael Bennett was briefly detained by Metro police last August after running from the Cromwell during what was — at the time — being investigated as a possible active shooter situation.

Bennett said as he was on the ground, an officer threatened to “blow his head off. ”

At the time, Sheriff Joe Lombardo said the arresting officer had his gun out, but his camera was not rolling.

The new holster system would have activated his camera as well as those of all the officers around him.

Several departments in Florida are already using this technology and Safariland says the New York Police Department is also a customer.

The smart holster also has sensors like those in your cell phone that can detect sudden movements.

Safariland is working with its partners on a “tussle mode” a software update that would automatically start the body camera if an officer wrestles with an aggressor.

The cameras also have a pre-roll function which stores up to three minutes worth of video showing what happened leading up to when an officer starts the recorder.