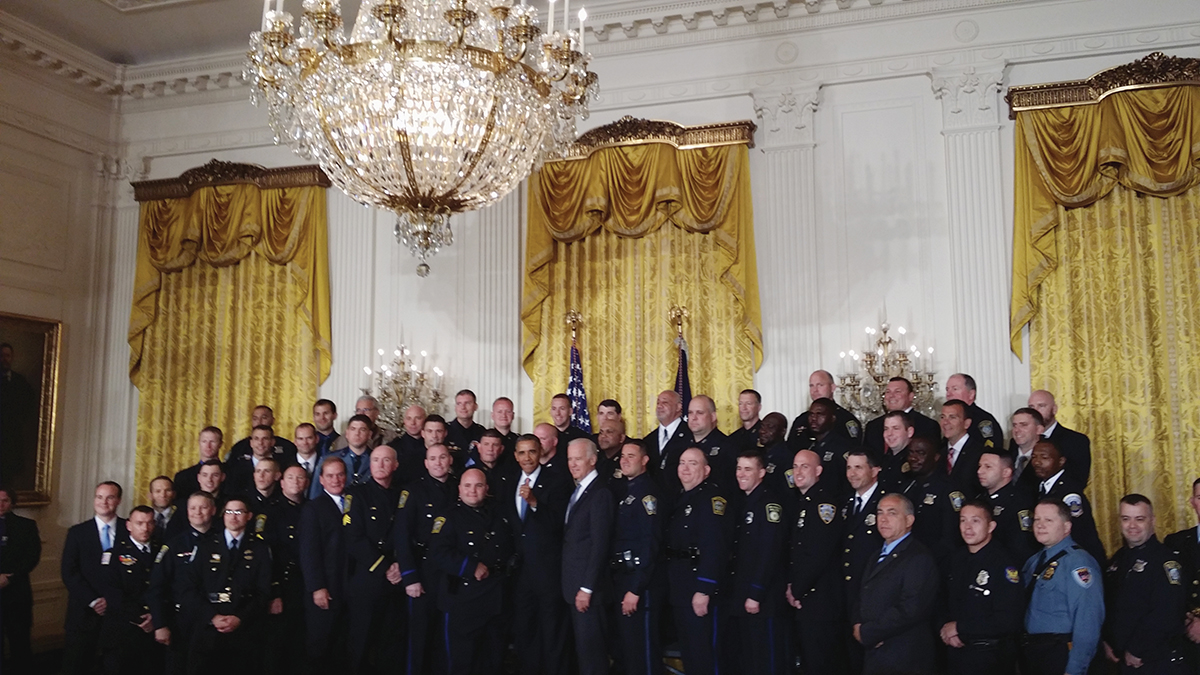 In 1962, President Kennedy proclaimed May 15 as National Peace Officers Memorial Day, and the calendar week in which May 15 falls as National Police Week. Established by a joint resolution of Congress in 1962, National Police Week pays special recognition to those law enforcement officers who have lost their lives in the line of duty for the safety and protection of others. Since that time, recognition has been given to officers who have made the ultimate sacrifice while protecting the men, women and children of the community they swore an oath to. Although the number of officers who sadly pay the ultimate price and lose their lives varies from year to year, the fact that even one is too many never changes. This year there were 286 fallen officers from across the nation added to the National Law Enforcement Officers Memorial in Washington, D.C. (compared to 105 in 2013). The names of all 286 officers were formally dedicated on the wall during the 26th Annual Candlelight Vigil on the evening of May 13.

As Washington, D.C., prepares for the ceremony each year, the city begins to transform. To begin with, there is the National Law Enforcement Officers Memorial. This is the nation’s monument to law enforcement officers who have died in the line of duty. The Memorial honors federal, state and local law enforcement officers who have made the ultimate sacrifice for the safety and protection of our nation and its people. The Memorial features two curving 304-foot-long blue-gray marble walls. Carved on these walls are the names of more than 20,000 officers who have been killed in the line of duty throughout U.S. history. Around the wall are a number of statues with inspirational quotes that describe the types of men and women honored on the Memorial. The quotes are set forth on these pages and really capture the character of those who make law enforcement their profession. 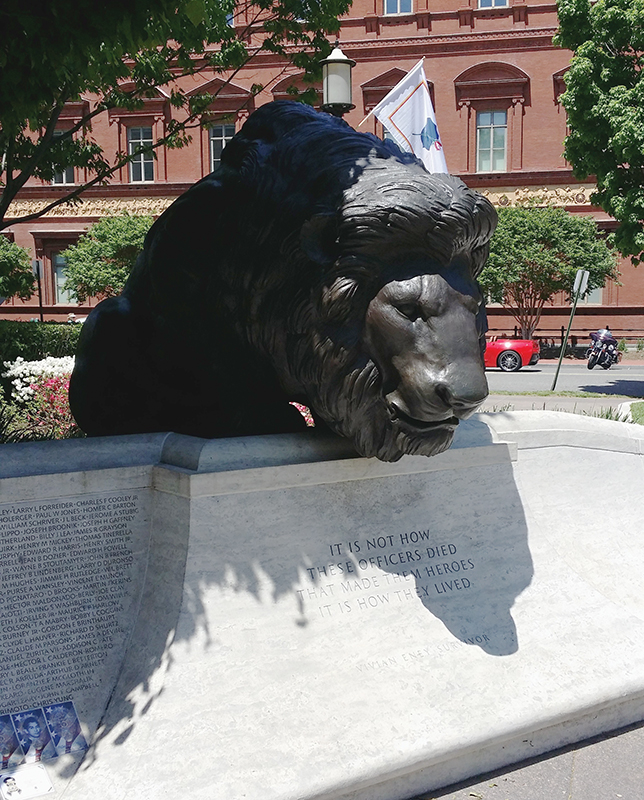 The Memorial is ever-changing. New names of fallen officers are added to the monument each spring in conjunction with National Police Week. During this week of honor, the Memorial begins to fill with flowers, wreaths, cards, notes, pictures and many other mementos. This continues until the night of the Candlelight Vigil. This is the night that all the new names being added to the wall (those who have perished in the past year as well as names from the past whose names and situations have only recently been discovered) are read and dedicated to the wall so they can forever be remembered. When night falls, a thin blue line laser fills the sky as a national law enforcement symbol. The names are then read by numerous representatives of the fallen officers from across the country. As the names are read, candles are lit and begin to burn among the thousands of officers and their families from around the world who are there to pay respect to the fallen heroes. There are no words that can begin to describe the feelings and emotion that come over you as you are part of this amazing event.

“The wicked flee when no man pursueth: but the righteous are as bold as a lion.”

As you travel around downtown, you soon know that the entire city is dedicated to this week of national honor for the men and women of law enforcement. The bars and restaurants offer specials for officers, the Metro transit system gives away free rides, banners fly high in welcome to all and the people of the city say thank you! It’s breathtaking to see this kind of respect and honor given to law enforcement, which, as you all know, is usually a thankless job. Also throughout the city, there are several other great dedications, including the Standing Watch for the Fallen Flag Ceremony, the Emerald Society & Pipe Band March and Service, the National Peace Officers’ Memorial Day Services and the FOP/FOPA Wreath-Laying Ceremony.

This brings me to one of my favorite and most outstanding parts of the week. This is the National Association of Police Organizations (NAPO) Annual TOP COPS Awards. NAPO is a coalition of more than 1,000 police units and associations representing 241,000 rank-and-file law enforcement officers from across the United States. For more than 30 years, NAPO has been instrumental in the passage of many important laws protecting citizens and police officers. 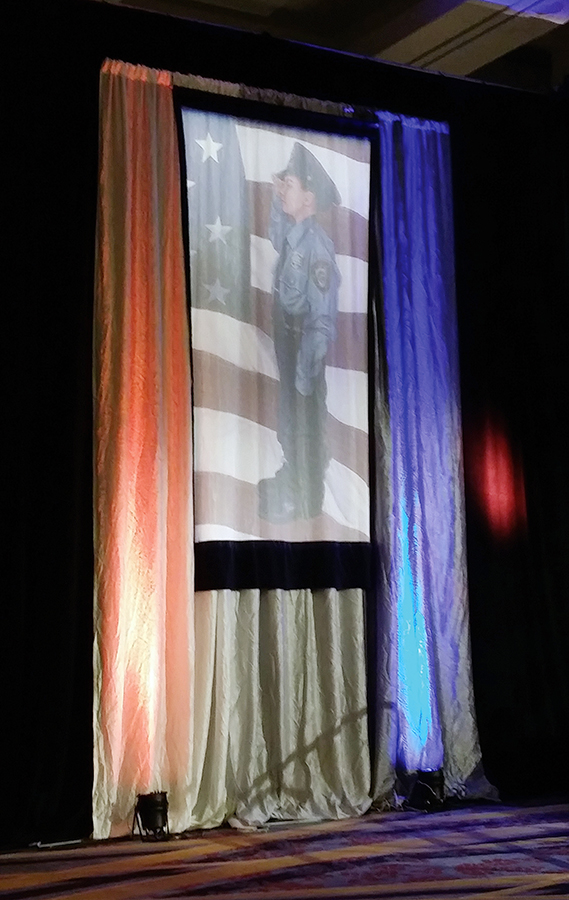 Each year since 1994, NAPO has presented the TOP COPS Awards Ceremony. The purpose of the TOP COPS Awards is to educate the American public about our nation’s heroes and to pay tribute to law enforcement officers in federal, state, county and local agencies from across the country for actions above and beyond the call of duty during the preceding year. Our TOP COPS are nominated by fellow officers. An independent Awards Selection Committee, composed of national law enforcement representatives, selects from hundreds of nominations one TOP COP case from each of the 50 states and U.S. territories. Of those, the top 10 cases are then selected as the year’s TOP COPS. In each remaining state, one case has been selected for which the officer(s) will receive an Honorable Mention award.

“The TOP COPS Awards provide an opportunity for all of us to recognize the brave men and women in America’s law enforcement community who selflessly put their lives on the line day in and day out,” said NAPO President Tom Nee. He went on to note that “Law enforcement officers care deeply about the citizens and communities they serve, and this honor is one way of letting them know their contributions are not taken for granted.”

“It is not how these officers died that made them heroes, it is how they lived.”

Many celebrities from NBC’s hit programs Law & Order and Law & Order: Criminal Intent, and CBS’s Cold Case, NCIS and CSI: Crime Scene Investigation serve as award presenters at this event each year. In past years, civic leaders, including the president and vice president as well as the attorney general of the United States, have helped honor these brave men and women by attending and speaking at the ceremony and inviting the year’s TOP COPS to the White House.

This night is such a great event put on by NAPO. It does exactly what it is intended to do, and that is to honor the men and women in law enforcement who went above and beyond the call of duty. This year, another member of the Las Vegas Valley law enforcement community was recognized P# 8799 as an honorable mention, Agent T. Scott Hendricks of the FBI. He is a member of the Criminal Apprehension Team (CAT) Taskforce. The following is his honorable mention at the award dinner:

Special Agent Hendricks is a member of the FBI fugitive task force known as the Criminal Apprehension Team (CAT). Their mission is to catch the most dangerous felons and fugitives, and this subject was high on their list. The subject had broken into multiple Las Vegas homes and terrorized residents with both knives and guns. So when the CAT got a tip on where the subject was staying, they set up surveillance and prepared to make a move. But he was crafty. He exited the rear of the house and jumped over a back wall into an alley. The subject then spotted police and started to run. SA Hendricks began pursuing him on foot but lost sight of the subject. Suddenly he started shooting from a place of ambush. Hendricks felt a bullet whiz by his head, then he was hit by a bullet in the front of his vest, and again in his lower back. However, even though he was injured, Hendricks was not going to let him hurt anyone else. With limited cover, Hendricks shot three rounds with his handgun at approximately a 90-foot distance. All three rounds connected with the subject, which ultimately stopped him and his reign of terror.

“Carved on these walls is the story of America, of a continuing quest to preserve both democracy and decency, and to protect a national treasure that we call the American dream.” 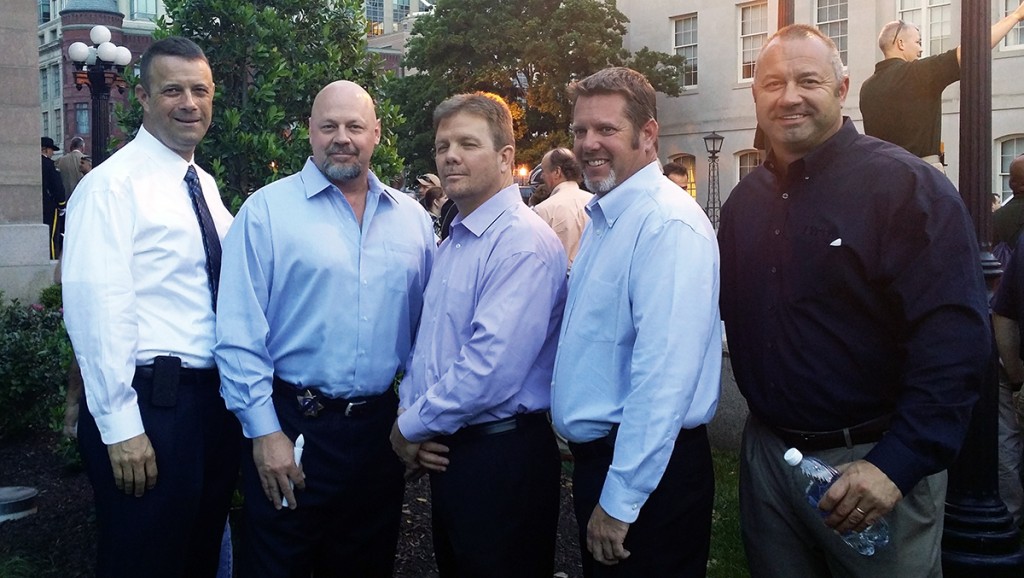 With that, I would like to take a moment to say thank you on behalf of the LVPPA to Scott and all the other men and women who do extraordinary things day in and day out in our valley. So many times the hard work and dedication to keeping our community safe go without a thank-you. Unfortunately, sometimes the ultimate price is paid and a fallen officer cannot hear the gratitude expressed. So I, on behalf of the LVPPA, would like to say, “Thank you!” Continue to do an outstanding job keeping our streets safe so my family and all the others can sleep safe at night!

“In valor there is hope.”

I would also encourage each and every one of you to try and make it out to Washington, D.C., to be part of this amazing week dedicated to us in law enforcement. Thanks and be safe!