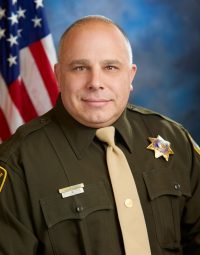 Brian was born in Poughkeepsie, New York and moved to Las Vegas in 1981. Brian went to Bonanza High School and graduated in 1992. Brian entered the Police Academy in August 1996. After finishing field training, Brian was assigned to the Northwest Area Command. Brian was assigned to the first graveyard bike squad that worked William Area. Brian moved to Swing Shift and worked as an FTO for 1 year. Brian transferred to the Police Academy and worked as a TAC Officer for 2 years. While at the Academy, Brian became a Defensive Tactics Instructor, taught combined PO/CO academies as well as Cadet/PSR and lateral academies. Brian also work as an instructor at AOST. In January of 2003, Brian transferred to the Narcotics Bureau. During his time in Narcotics, Brian was assigned to Street Narcotics as well as the Admin squad. Brian became a Taser Instructor and was in charge of the Narcotics AOST and RBT training. Brian served as an Appointed At Large rep for Covert Ops for over 1 year. After 15 years in Narcotics, Brian was appointed to the LVPPA Executive Board in December of 2017 as Secretary.