As many of you are aware, for several months, at the request of the leadership at DTAC, we have been negotiating an MOU with LVMPD to allow day and grave shifts to work 12-hour shifts for a six-month trial period. As outlined in our CBA under article 18.1, your work week may not exceed 40 hours. However, if both parties mutually agree, an alternate schedule of 80 hours biweekly may be utilized. The leadership at DTAC believes that the implementation of 12-hour shifts will help reduce violent crime in the area command, as well as increasing manpower during peak hours.

In our first meeting with Captain Chavez and Lieutenant Cole, we started breaking down the shifts, staffing, hours worked and time off. The shift hours were set to provide maximum coverage during peak crime hours. Days would work 0530–1730, Swings would work 1600–0200 and Graves would work 1900–0700. One of our biggest concerns with the 12s was fatigue and safety. Working a hard 12 like during A/B roster would be unacceptable. We wanted to ensure that shifts would be conducted as they are now, with briefings and debriefings occurring unless there are exigent circumstances. During payday weeks, officers would work three 12-hour shifts. During non-payday weeks, officers would work three 12-hour shifts and an eight-hour shift that would be reserved for training. We also wanted the ability to review the trial period monthly with the officers and opt out if it was unacceptable to them.

After we met with the leadership at DTAC, a survey was sent out to the members at DTAC. We then attended every patrol briefing to present the options of the 12-hour shifts and our initial draft of the MOU. After that, we conducted a hand vote and found that 93% of the officers wanted to participate in the trial period. With the overwhelming majority in favor of this, we submitted the MOU to LVMPD.

After some time, we received a revised version of the MOU from LVMPD. We again met with Captain Chavez and Lieutenant Cole to discuss the revised MOU and the changes that were made. We went back to the members at DTAC and presented the revised MOU, then again presented the options at each briefing and conducted a hand vote. This time, only 53% of the members approved going forward with the trial period. With the large drop to only 53% approval, the PPA Executive Board informed LVMPD that we would not be signing the current version of the MOU; however, we would continue to negotiate the 12-hour shifts and MOU. After several days, LVMPD and the PPA agreed to an MOU that closely resembled our initial proposal and was fair for both parties. Most importantly, it was an MOU that was beneficial to the members of DTAC.

The trial period is set to begin on February 23 and end on August 23, after which it will be evaluated for effectiveness. As this is a trial period, it will end in August regardless. After that, could this trial make it to other areas? If it does, we will be ready to discuss it with you and proceed in the same manner. 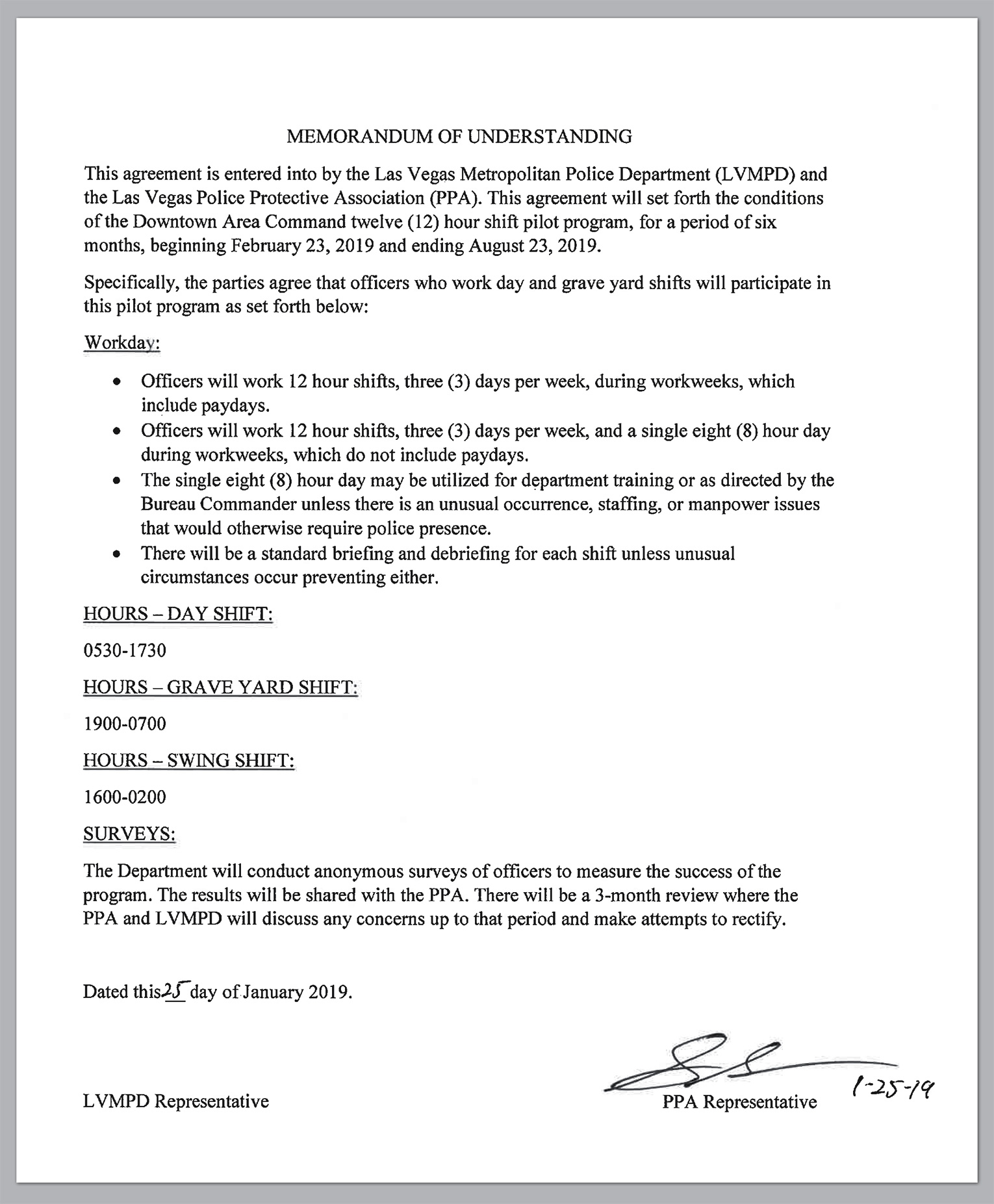