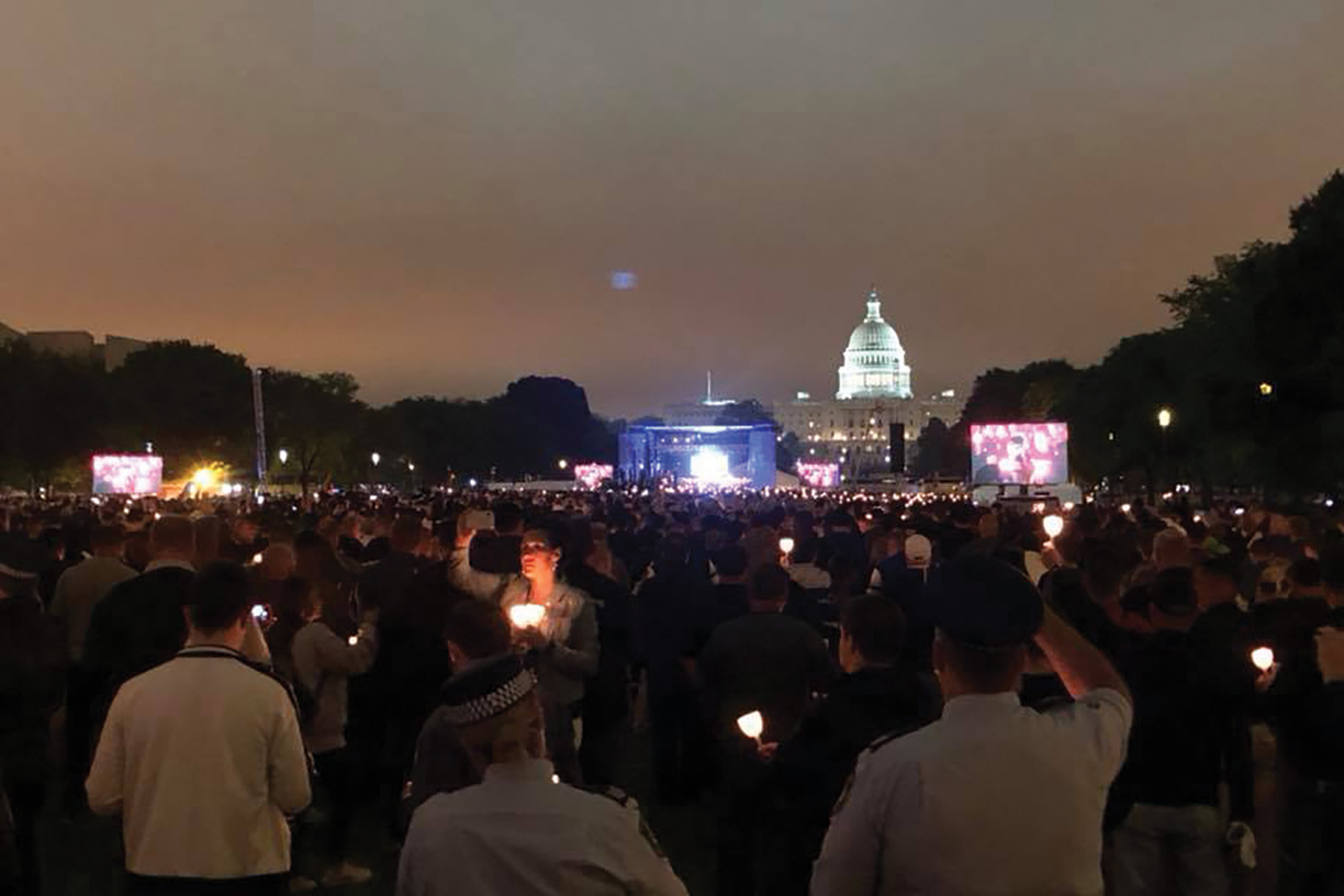 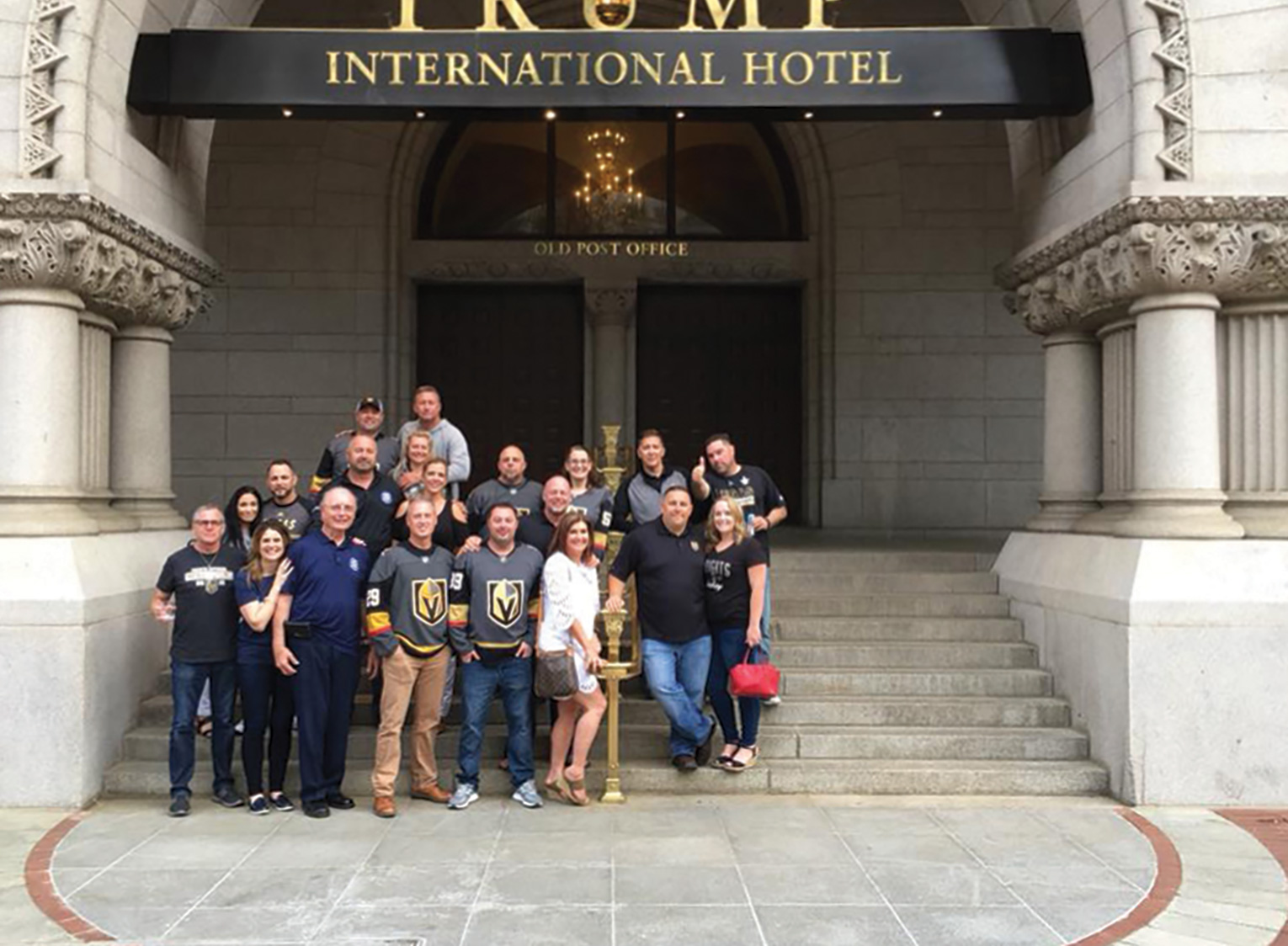 Every year, during the week in which May 15 falls, the law enforcement community gathers in Washington, D.C., to honor our brothers and sisters who made the ultimate sacrifice while protecting and serving their communities. Tens of thousands of attendees from U.S. police departments and even international agencies are joined by dignitaries and officials from the top levels of our government to pay tribute.

Members of the LVPPA Executive Board and staff attended numerous ceremonies, including the Police Unity Tour Arrival Ceremony, the 30th Annual Candlelight Vigil and the National Association of Police Organizations’ Top Cop Awards. The Executive Board was joined by the five lucky winners of the PPA’s annual raffle for an all-expenses-paid trip to attend the memorial ceremonies. The two general member winners were Jason Seely (CCDC) and Al Mermini (SEAC), and the three winners from the Board of Directors were John Abel (NWAC), Troy McArthur (CCDC) and Mike Malone (Retirees). Some of the attendees share their experiences from the trip in the letters below. 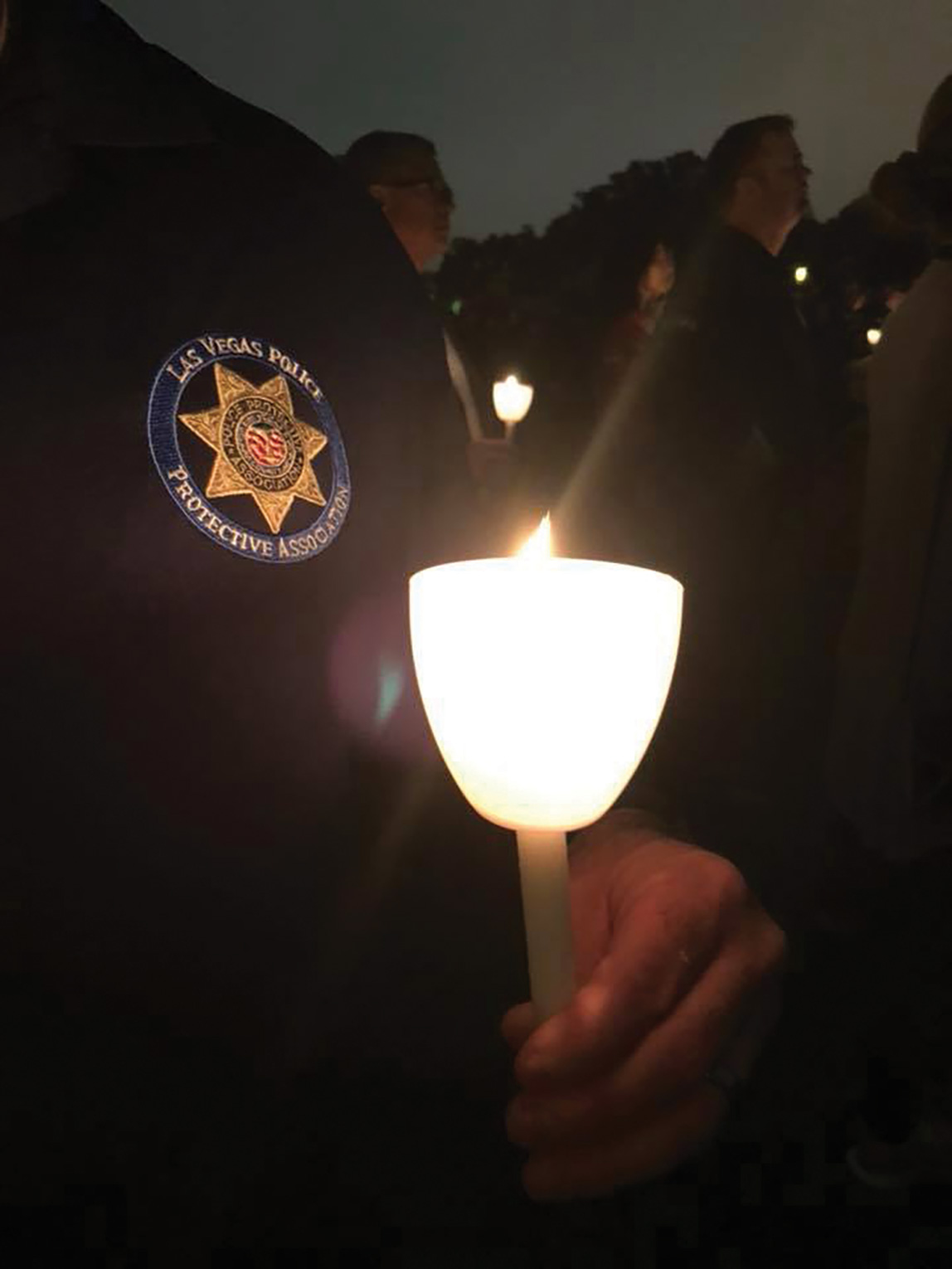 National Law Enforcement Officers Memorial Wall
This year’s National Police Week ceremonies carried a deep meaning for the city of Las Vegas and the Las Vegas Metropolitan Police Department. Over 20 of the Department’s fallen officers are carved on the walls of the National Law Enforcement Officers Memorial Wall. Unfortunately, this year we had to add one more name to the wall: Officer Charleston Hartfield. Officer Hartfield was off-duty attending the Route 91 Harvest Festival on 1 October and tragically lost his life along with 57 others during the deadliest mass shooting in modern U.S. history. He died performing lifesaving actions, escorting numerous concertgoers to safety in the moments leading up to his death. We will never forget his bravery and commitment to protecting and serving others.

Top Cops Awards
The Department has an impressive number of Top Cop recipients, and this year was no exception. Sheriff Joseph Lombardo accepted an award on behalf of the entire Department, which was honored for its heroic response to 1 October. Sergeant Josh Bitsko, Sergeant Greg Everett, SWAT Officer Levi Hancock, Officer Richard Golgart, Officer Casey Clarkson and Officer Brady Cook were also recognized for their valiant efforts during the 1 October shooting. We congratulate everyone in the Department for coming together and exhibiting strength and resiliency in the aftermath of one of the most devastating events in our city’s history. 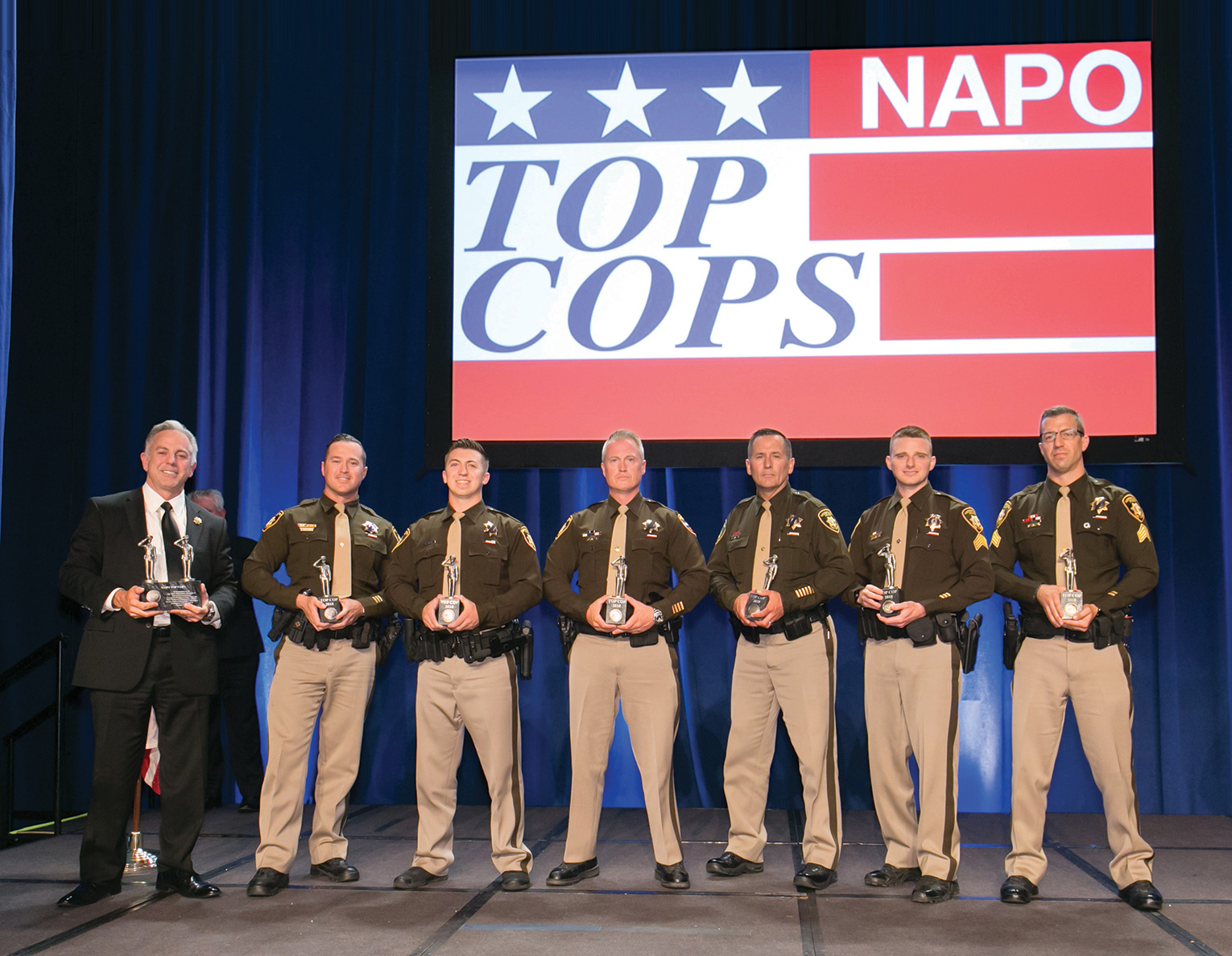 To you and the Executive Board, thank you for the opportunity to be a part of the trip to Washington, D.C., from May 10 to 15. Many parts of this memorable experience have been shared with others in our community because our PPA members in attendance joined together for National Police Week 2018.

Memorable experiences: As far as the eye could see, was the glimmering of candlelight on the National Mall in Washington, D.C., on Sunday, May 13. Attended by law enforcement from all over our nation, LVPPA joined with surviving families and others to honor officers who died during their service responding to calls for help to protect life and property. One of the featured speakers was the chief law enforcement officer of the United States, Attorney General Jeff Sessions. He spoke of our fallen officers, who he said were “more than a name etched in stone on a memorial; they were persons who meant the world to someone — to a parent, a sibling or a child” (https://tinyurl.com/yb5f3pbt). Attending this vigil signified the importance of Saturday’s Unity Tour to the National Law Enforcement Officers Memorial, which honors the 21,183 officers who died throughout American history. On Monday, May 14, the National Association of Police Organizations (NAPO) paid tribute to seven LVMPD officers for their heroic actions. It was interesting to watch the videos of Top Cop stories.

Your LVPPA events coordinator, Adella M. Solano, did a magnificent job of organizing the LVPPA events and activities for this Police Week experience. I appreciate how she kept us informed and organized and ensured our safety and being together during our time in Washington, D.C. 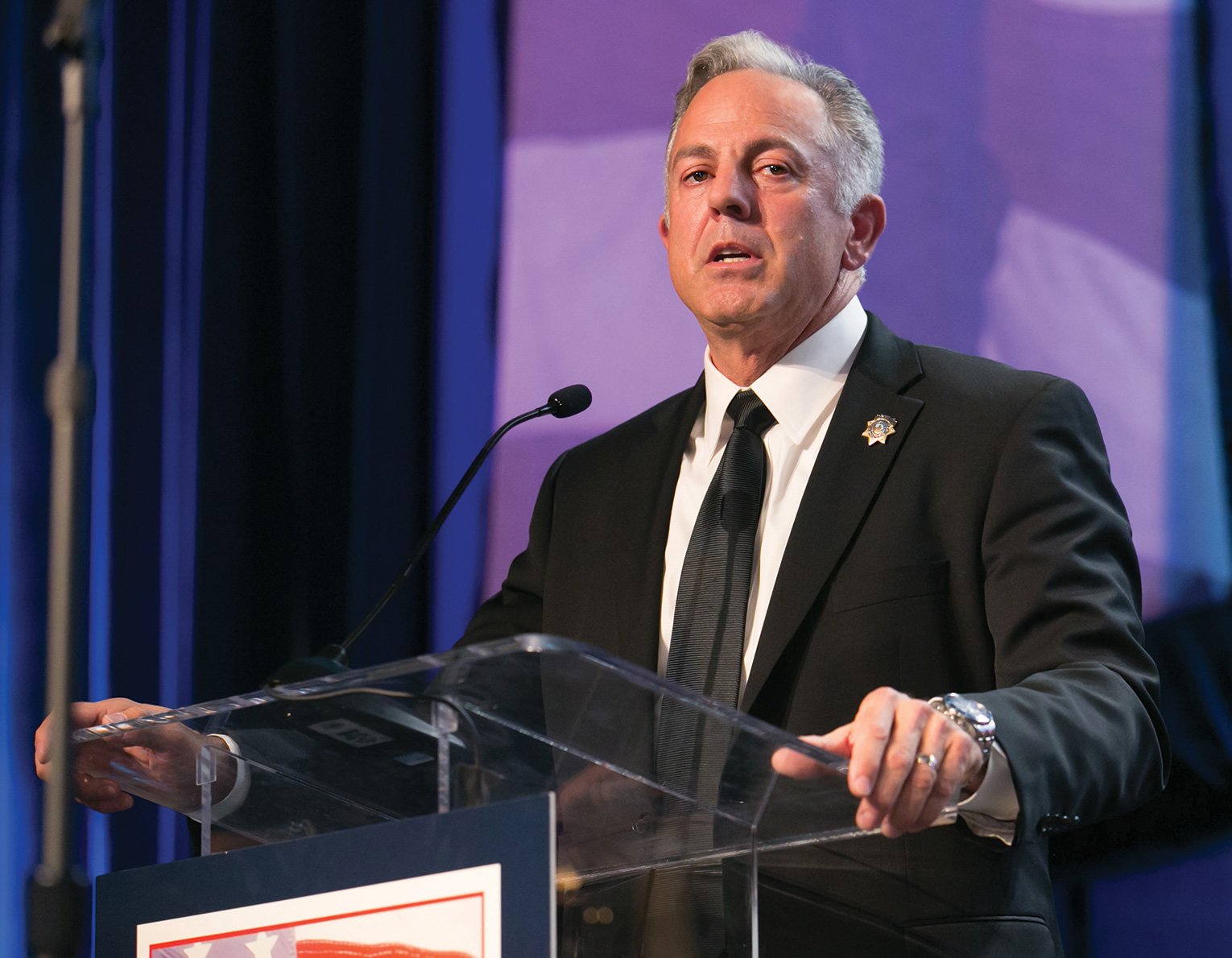 I won a raffle at an LVPPA Board of Directors meeting earlier this year to be a part of the LVPPA delegation to Washington, D.C. I believe to qualify to win the raffle as a Board of Directors member, you had to attend a certain percentage of Board meetings and trainings. After my name was read as a winner, I knew it was going to be a great experience.

While in D.C. (for about five days), each day had some free time associated with it. With this time, we went to many of the national monuments and memorials, all of which were amazing. My favorite of these was the Lincoln Memorial, the White House and the Arlington National Cemetery, where I witnessed the changing of the guard. There was so much more I wanted to see and do. I will definitely make time to go back to D.C. and see more of the history in that part of our country.

Every day had a National Police Week event or LVPPA business; this included the Police Unity Tour, LVPPA group dinner, 30th Annual Candlelight Vigil and the NAPO Top Cops Awards dinner. Every event was amazing. What stands out for me was the NAPO Top Cops Awards dinner. It was an evening filled with a variety of emotions, and great heroes from throughout the country were recognized, including members of the LVMPD.

The city streets and subways during the week were filled with officers, their families and friends of the blue. You could not go anywhere and not notice the presence. It was a good feeling, and one could not help but feel a bond with each other.

I’m certainly grateful for the experience, and it will be something I remember forever. 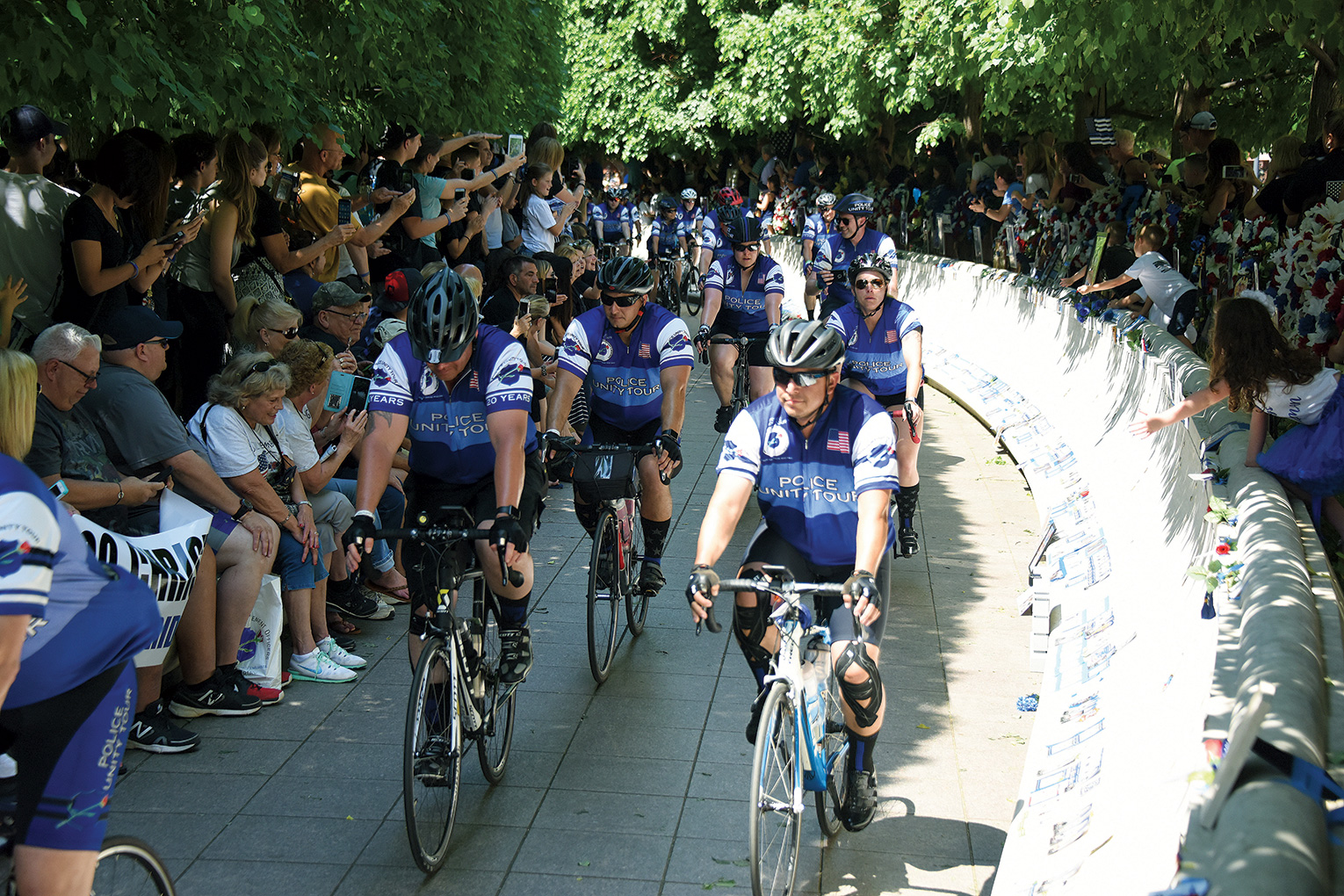 Each year, the LVPPA Executive Board holds a raffle for three Board members and two general members to attend an all-expenses-paid trip to the National Police Week ceremonies. This year, my name was lucky enough to be drawn, and I was able to accompany other Executive Board members to Washington, D.C., to attend Police Week and the NAPO Top Cops Awards dinner, where our agency was recognized for its actions during 1 October. This trip was especially meaningful for us because we lost Officer Charleston Hartfield during the events of 1 October. His name was engraved on the National Law Enforcement Officers Memorial and read aloud during the candlelight vigil that took place on the National Mall.

While I had a wonderful time and met many officers from around the country who shared their own stories with me, I never lost sight of why I was there: to honor our fallen brothers and sisters from around the United States. Seeing their stories on the internet does not compare to hearing and seeing their stories in person, which is something I experienced during the different Police Week events. I will never forget seeing all of the Police Unity Tour riders arriving in our nation’s capital, making their way to the police memorial to pay their respects to all of the fallen officers who lost their lives in the line of duty throughout the decades.

During the different events throughout the week, our LVMPD Honor Guard represented our agency well and showed the rest of the country what a top-notch agency we have in Las Vegas. It gave me chills and a sense of pride when I heard the bagpipes and drums play, knowing that it was officers from our agency behind the instruments. I tried to take in as much as I possibly could, but in reality, I needed two weeks to truly appreciate Washington, D.C. I encourage every police officer to visit Washington, D.C., at least once during Police Week, just to experience all of the pomp and circumstance surrounding the different events. It helped me put things into perspective about the dangers that we face on a daily basis. I cannot thank the LVPPA enough for drawing my name and taking me on this trip. I also encourage every LVPPA member to be involved and come to membership meetings, because that is what makes trips like this possible.