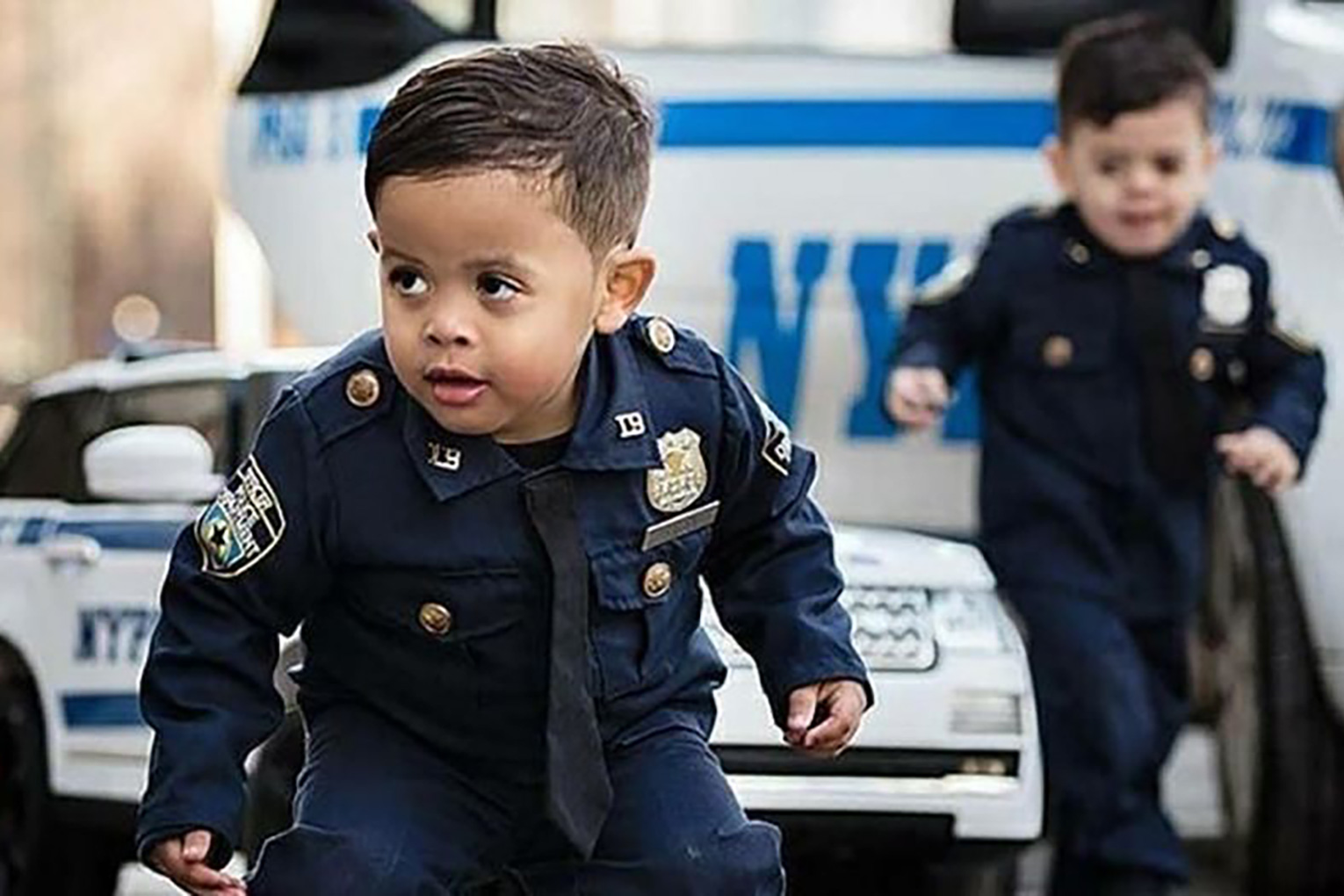 With their crisp white shirts, pressed trousers, and proper collar brass, 5-year-old twins Aaron and Evan Rolon know exactly which of their heroes to dress as: NYPD lieutenants.

The “Twin Squad,” as these little officers are called, have traveled to police precincts around the country showing law enforcement their appreciation while building a following on their social media accounts. According to their parents, Kelly Caceres and Alejandro Rolon, it all started when the boys were driving their ‘car’ on the sidewalk near their home in Manhattan’s Washington Heights — the 34th precinct.

“They were riding in their black Range Rover on the sidewalk and police happen to pull up to the side. I said, ‘Oh, you’re going to get a ticket. You’re riding on the sidewalk.’ And [the officers] put their lights on and came out with their ticket book,” Alejandro recalled. “And it was just so real. And everybody was just like, wow, are they really getting a ticket? But, you know, it was a joke.”

The joke swiftly turned into a viral video garnering thousands of social media likes, views, and shares. The then-2-year-old Aaron handed the ticket back to the police officer, refusing to accept his summons. The video, which is full of laughs, got Alejandro and Kelly thinking of ways to give something back to the officers who brought them so much joy.

“As a thank you to the NYPD, I decided to dress them up as miniature cops. Little police car. And I just took them to the police. And the reaction was priceless. They loved it,” Alejandro said. “And then after that, I was getting invitations to go to other police departments and we would do roll call with them.”

The preschool police duo has been connecting with officers far and wide through their Instagram and Twitter pages “pair_up_.” The Rolon family has been making it their mission to thank those who serve. The twins have been to almost every precinct in New York City with three more still to visit: The 120, 121 and 123 — all of which are located on Staten Island.

“We don’t know if their car will make it all the way over there,” Alejandro said jokingly. “Mind you, we’ve been to Boston. We’ve been to Atlanta, Georgia,” Kelly added. “They’re very well recognized as soon as they see the boys in the cars.”

With their parents and three siblings in tow, Aaron and Evan have traveled across the country visiting police officers. They say their most exciting stop came unexpectedly on the way home from Atlanta.

“We made a pit stop in DC and we ended up mistakenly getting off on the exit for the Pentagon. The police, you know, they have special police there. They came to our car right away,” Alejandro said. “And I lowered the window, the back window. And he looked at the boys and he said ‘Is that pair up. Well, I gotta get a picture of you guys.”

Social media fame aside, Aaron and Evan know exactly why police are so important. “They protect us!” The boys said in unison. The twins are now sharing that lesson, along with the many others they have learned from police, with their kindergarten class.

The boys are trading in their badges for books and have a long way to go before becoming lieutenants for real. Luckily, their studies aren’t getting in the way of seeing their friends in the NYPD. Officers from their local precinct visited the kindergarteners and their class with trucks and K9’s.

Alejandro noted that “[Their class] got to explore all the cool things they have in the police cars and wear the vest and it was just really great to see these kids, you know, experience something like that, something that maybe most kids won’t.”

Aaron and Evan both plan on going into public service. While Aaron wants to be a police officer, Evan wants to head in a different direction. When asked what he wants to be when he grows up Evan simply said, “Firefighter!”

While the battle of the badges may blaze on at the Rolon house, Kelly and Alejandro say they just want their boys to be happy. “We will support them in whatever they want to do,” Alejandro said. “Maybe one day they’ll run into each other. You know, in his firefighter uniform and this one in this police car. They’re both great jobs saving people. That’s fine by me.”